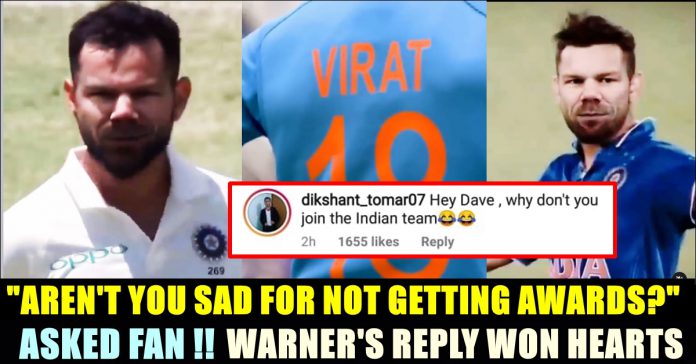 After Kohli won the player of the decade award from ICC, Australian opener David Warner congratulated him in his own way through his official Instagram account. He replied to a number of Indian fans who commented on his post in a humble manner only to win the hearts of them. The 34 year old is enjoying a huge fan base in Instagram and majority of them are from country India. He gained widespread acclaim after recreating “Butta Bomma” song with his family. Nowadays, he has been using a mobile application to morph his face into popular Indian celebrities to impress the fans.

“no one will guess this player of the decade 👏👏👏 @virat.kohli #congrats #funny #faceswap #seriousplayer #gun #welldeserved” read the caption of Warner’s post.

The ICC awards of the decade recognizes best players across the Cricket over the past 10 years, invited fans to vote for the first time by selecting the winners across categories including the Sir Garfield sobers and Heyhoe flint awards, which celebrate the best overall player from the men’s and women’s game over the past decade. Fans provided 100% of the vote for the spirit of cricket award of the decade from the list of a past winners since 2011. Reports suggests that 1.5 million fans from across the globe have casted 5.3 million votes to the best players of the decade.

Virat Kohli, the winner of the Sir Garfield Sobers Award for ICC Male Cricketer of the Decade, talks about the last 10 glorious years of his career 🙌#ICCAwards pic.twitter.com/P9FSDgCkWJ

On seeing this post of Warner, enormous number of fans reacted in various ways. Many of them asked the cricketer to join Indian team and one of them questioned “Aren’t you unhappy for not getting any of the awards?”

Replying to this question, the cricketer, in a humble manner, replied saying “no one can compete with him”

Check out his other replies below :

David Warner is an Australian left handed cricketer who is representing his team in all the three formats. His terrific batting skills and athletic fielding abilities had gained him the world wide recognition. In Indian Premier league, Warner has been leading Sunrisers Hyderabad team. The recreation videos impressed the fans of India as they are mostly based on South Indian movies. Currently he is enjoying 50 lakh plus followers in the photos/videos posting social media platforms. He is one of the main reasons for Natarajan’s existence in the national team now.

Previous article“My Only Aim In Life Is To Defeat Vijay” – Ajith !! WATCH
Next article“No One Is Perfect” Anitha’s First Instagram Post After Eviction !!