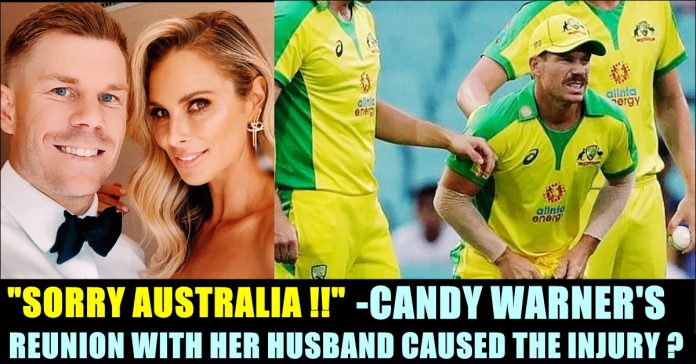 On Monday, it was reported that Australian opening batsman David Warner was ruled out of the limited-overs series and will be in a race to be fit for the first test which begins from December 17th in Adelaide. In a statement, Cricket Australia said that Warner, who had suffered a groin injury during the 2nd ODI against India in Sydney on Sunday, had missed today’s One day international and will also miss the T20 International series. He is expected to to regain fitness for the upcoming four match Test series against India.

The injury occured when Warner tried to save a ball struck by Shikhar Dhawan towards the mid off in the 4th over of India’s innings. When Warner dived to stop the ball, he got injured. Warner grimaced and clutched his groin as he got to his feet while the team’s physio sprinted onto the field. The SRH captain walked off the field.

Candice Warner, wife of the Australian opener made an unexpected statement regarding the injury, after two days. Through the statement she made, it is believed that something else other than the sports responsible for the left handed batsman’s injury. She reportedly hinted that their impulsive action on bed might have caused the injury of her husband.

After playing for Sunrisers Hyderabad in the 13th edition of Indian premier league, Warner had to stay in quarantine for two weeks Australia. He returned to his home after 4 long months. Warner’s wife Candice, while talking with Triple M’s Moonman in the morning, said “Sorry Australia !!” in a lighter note, hinting that she could be the cause for her husband’s absence in the team.

A report of Mail online, had said that Candice dropped a hint while talking on the show that they had enjoyed a marathon Sex session before the match against India. “We only sort of reunited after four months apart, a couple of days prior… and everyone’s like, “What have you done to him?,” she said in the show while giggling. “I’m like, ‘It wasn’t me! It was not me’. Sorry Australia,” she laughed.

However, she made sure that Warner is doing everything to recover from the injury before the first test against India which is going to take place on 17th of December. “He’s got a groin strain and now it’s just a lot of recovery a lot of monitoring and hopefully… it’s 17 days before the first test against India so hopefully he’ll be ready to go,” Candice said.

“But it is serious, and he is in a lot of pain. He will not not to miss the first test against India” she added. India and Australia are going to play four test matches followed by three T20s. The ODI series was won by team Australia and the third and final ODI is currently progressing.

Video Of Tim Paine Sledging Rohit From Behind The Stumps Going Viral !! Mumbai’s Reply Was Hilarious !!

Chateshwar Pujara scored a composed century,  while Virat Kohli, Mayank Agarwal and Rohit Sharma contributed with a fifty each as India declared their first...

Day after the match against Chennai Super Kings and Mumbai Indians, former Indian opener Virender Sehwag came up with a video for his show...