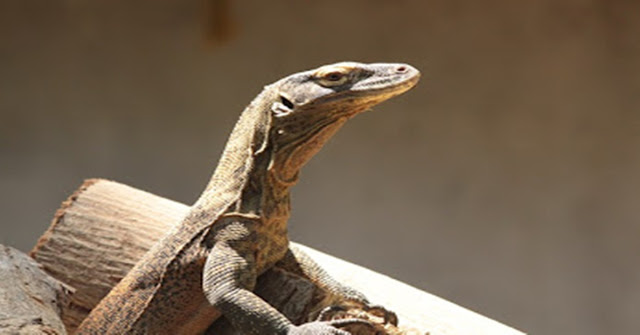 The four dragons, three males and one female, have arrived from the Bronx Zoo in New York

Says Nikhil Whitaker, curator at the Croc Bank, “Right now, they are quite brilliantly marked. As they grow older they grey out.” He also adds that you can’t be fooled by their current size.
“Even now, when they are just over a metre long, they will still charge and try to bite. They are very active, inquisitive animals,” he adds. The animals’ handlers are being quite careful in dealing with the dragons because of that nasty bite, and also because they need to be trained to properly recognize schedules such as when they are going to be fed and so on.
In the wild, adult komodo dragons are fairly top of the food chain, and eat carrion as well as hunting various kinds of large prey including water buffalo and deer. Hatchlings eat insects, geckos and small birds. At the Croc Bank, they are being fed a combination of chicken meat and mice or rats.
It is their active nature that Nikhil thinks will make them a welcome addition to the displays at the Croc Bank. “Sometimes people complain that the crocodiles are not doing anything. The dragons are always walking around, sniffing the air, burrowing in the ground. They are also really smart.”
Sniffing the air — which Nikhil says the dragons do through their tongues, much like snakes — is one of their key sensory mechanisms, through which they can catch everything from the pheromones of another animal of their species, to the scent of prey and work out locations and distances based on how the smells fall on their tongues.
In fact, says Nikhil, they can also get quite territorial, and therefore are currently kept separated from each other so that they do not fight. It’s only after they mature that the males will be given a supervised introduction to the female, after which they will be separated again.
Coming as they do from Indonesia, Komodo dragons like the weather hot and humid, and in that sense they feel right at home at the Croc Bank. “The weather is excellent for them and they are settling in well here. We’re really lucky to have the climate already sorted out. In the US, you have to spend a lot of money and effort, provide them with heat lamps and temperature monitors, to make sure that they are kept in the correct weather conditions. The Croc Bank is currently undertaking a crowdfunding initiative to fund the new enclosures for the dragons, and are also seeking out corporate sponsors for the purpose. Ideally, says Nikhil, they would like to find sponsors who could adopt each of the dragons, providing the whole range of funding needed for housing and feeding them.
The Madras Crocodile Bank is located on the East Coast Road between Chennai and Mamallapuram, and is open six days a week from Tuesday to Sunday between 8.30 am and 5.30 pm.
For a first look at the Croc Bank’s new Komodo dragons, check out their video:
Source