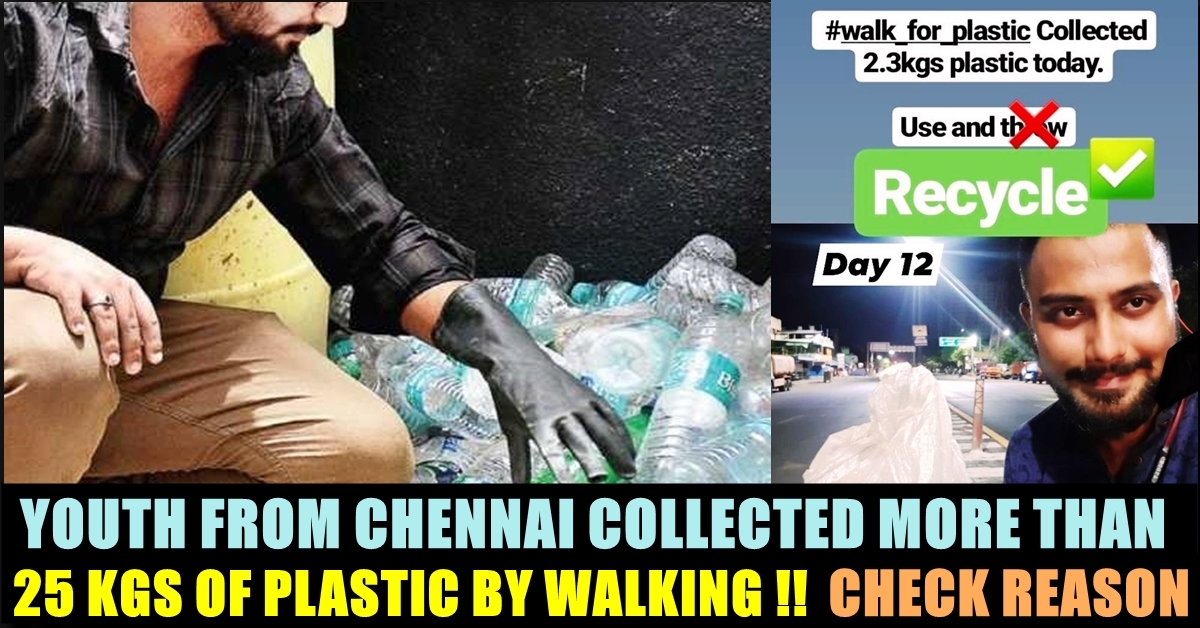 Tamil Nadu, on January 1, 2019, became the fourth state in India to implement a ban on single-use plastics. Maharashtra was the first do it on March 23, 2018, Telangana followed the feat in June and Himachal Pradesh in July. But most Indian states, or almost all, have banned plastic bags.

Single-use plastics are disposable plastic items that are commonly used for packaging and include items intended to be used only once before they are thrown away or recycled.

Despite the ban, the usage of plastic continued in the southern state which led Chennai Artist Gowtham B to initiate a movement called as #Walk_For_Plastic. His idea  of making Chennai Plastic-free transformed into an initiative during earlier this month. Gowtham involved himself in the #Walk_For_Life movement as a part of which he started to walk two to three kilometres at night to collect plastic bottles.

In the last 14 days, Gowtham has walked for more than 10 hours and covered 36 kilometres in which he collected more than 25 kgs of plastic bottles in different roads, pavements and outside small time eateries.

“Plastic can be easily recycled if it was properly disposed. I wanted people to know about it for which I initiated #Walk_For_Plastic campaign. People can find 2 kgs of plastic bottles in their 2 kilometres of walk. Each person collecting 10 water bottles during their walk would be a major help for the entire society. It is equal to covering more than 1000 sq ft” said Gowtham to The New Indian Express.

The collected plastic bottles reaches scrap dealers for recycling through a paper mart near Gowtham’s house. Gowtham worries about many people being unaware of things like plastic bottles, milk sachets and biscuit covers can be recycled. “When plastic goes into garbage bins, it could not be recycled as it gets crushed. If people starts differentiating between degradable and non-degradable wastes, then the wastage of plastic can be reduced” he added.

Gowtham is someone who is not new to this kind of socially responsible activity. He made a 23-ft killer whale using plastic bottles and caps, to create awareness on how harmful using plastic is. He gets 15 rupees for a kilogram of plastic bottle and 8 rupees for a kilogram of plastic covers which was provided by him to plastic ragpickers in the city in order to encourage their livelihood.

The social activist is indeed receiving huge support from the social media for this #Walk_For_lIfe campaign. Many volunteers from various part of the city joined the youth to support his campaign who walks from Paadi bridge to Saravana Stores in daily basis to collect plastic bottles.

Gowtham wants at least one member from a family to take part in this campaign which will make the whole family realize the importance of wasting plastics. He states that Awareness starts at home who also wishes every Chennaite to take up this challenge to make a change in the environment.

Gowtham does not want to compel people to involve in this activity as he believes that the will should come from their heart. “An artist should not just communicate through art, but through activism, too.” he quoted to The New Indian Express who says that he will try to reduce the wastage of plastic even if he is the only person of #Walk_For_Plastic campaign.

Random Instagram User Offered This Young Actress 1 Lakh To Date !! Check How She Responded !!
To Reduce Expense, Vaishnavi Avoided Gold In Her Wedding & Posted It In Social Media !! Check What Happened Next !!