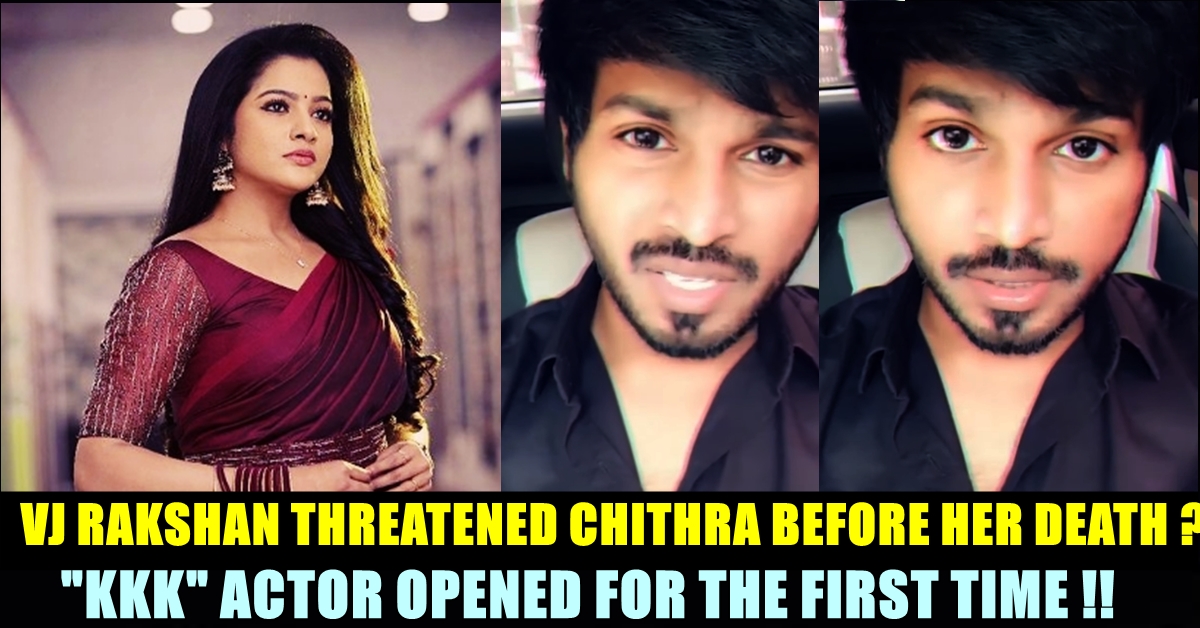 Video Jockey Rakshan, finally opened on the accusation that did rounds in social media platforms against him for the past couple of days, according to reports. Replying to the allegations which said that he threatened VJ Chithra, Rakshan reportedly said that the entire news that linked himself and the “Pandiyan Stores” actress is a lie. He made it clear that Chithra was a good friend of him and pointed his visit to the funeral of her.

Days ago, A shocking report of Nakkheeran emerged saying that Vijay Television fame Rakshan threatened Vj Chithra and could have caused the rift between Hemnath and Chithra. The report said that the “Kannum Kannum Kollyadaithaal” actor dated Chithra and threatened the actress by showing an intimate video he recorded. Ganga Vaani, a friend of Chithra disclosed about the details, the report added.

Chithra’s mother Vijaya firmly believed that her daughter would have never killed herself and demanded a fair probe. After the picture of her body surfaced, bruises were found in her face which made public to doubt the cause of her death. Meanwhile, report of Nakkheeran youtube channel emerged disclosing about the statements provided by a number of friends of Chithra.

Ganga vaani, a friend of Chithra reportedly said that Vijay TV fame Rakshan recorded a video of himself and Chithra when they dated each other and threatened the actress. “Chithra had a doubt on Rakshan that he could have shown the video to Hemnath” said Ganga vaani, according to Nakkheeran. “Rakshan and a son of a minister in Kadalur are thick friends.” she reportedly said.

Now, according to Indiaglitz, Rakshan has provided a telephonic clarification to a popular magazine. The report said that Rakshan denied the entire news and added that he’s himself working for a meager salary. “Generally I won’t raise my voice while speaking to others. I don’t know much about Chithra. I met her only through Vijay Tv shows and that is the only way I know her. I interacted with her only while participating in the programs of Vijay TV” said Rakshan, according to the report.

“The news on me threatening Chithra before her death and the speculations on my relationships with her are complete lies. I have been asking suggestions from my friends to take legal action regarding the matter. I got baffled on hearing about such baseless rumours. I reached this stage in my life after so many struggles. I still live in a rental house and my income is not huge. Don’t ruin my life by spreading such rumours. Chithra is a good friend of mine but I am not connected to her death in any way” he said according to Indiaglitz.

Chithra’s husband Hemnath got arrested by the Police for abetting the actress to commit suicide. “Based on the outcome of the investigation carried out for the past few days, we have slapped section 306 of the Indian Penal code against Hemnath” said a Police official regarding the arrest of Chithra’s husband. He was arrested by the cops and was produced at the Poonamalle High court. He has now been lodged in Ponneri jail after being interrogated for six long days. Chithra and Hemnath registered their marriage two months ago and were planning to have a traditional wedding on January.

Sai Pallavi Opens On The Existence Of Casteism In Her Own Family !! WATCH
Arun Vijay Replied To This Old Speech Of Suriya Now !! WATCH
Advertisement