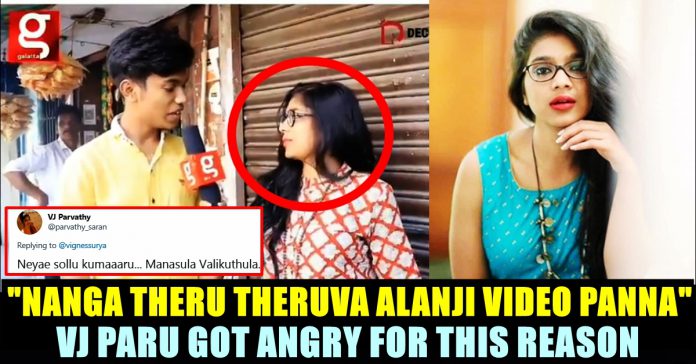 VJ Parvathy of Galatta youtube channel became overnight sensation as the way she hosting celebrities and the way she conducting public opinions impressed youth audience within a very short span. She initially rose to fame once music director, hero and filmmaker Hip Hop Aadhi told her that he “sighted” (local term used to define the act of gazing at the opposite gender) her in one of an interview.

In the interaction, She asked Aathi whether he “sighted” any “Aunty” till now to which Aadhi immediately replied by saying “Not until meeting you”. The video went extremely viral in social media platforms such Twitter, Facebook and Instagram.

Since then many fans started calling her “Aunty” and she tries to restrict them which is evident through her twitter timeline.

Apart from this, the video jockey’s videos of public opinions are also trending in the social media platforms. Meanwhile, it seems Parvathy got a bit dejected on seeing videos of her getting shared in social media by individual pages without giving credits to her. She herself expressed it through her official twitter account which was deleted later.

“I don’t know how these people steal contents and post it in their own pages without even giving proper credits to the creator. We are roaming in streets to make a video and you guys would post it in your just like that?” she said in her tweet in a light manner. She even used a popular dialogue from the recently released “Bigil” to make sure that she is not being harsh.

Before that she posted a tweet writing “Hey. Thanks for stealing our content & posting it here. Buhahaha. Anyway, I appreciate your effort. Do the necessary tags also.”

Hey. Thanks for stealing our content & posting it here. Buhahaha. Anyway, I appreciate your effort. Do the necessary tags also.

She even expressed her pain to one of her follower with the reference of a Tamil movie dialogue.

Comment your views on these emotions expressed by VJ Paru !!

Previous articleKushboo Gives Back To A Hater In His Own Way !!
Next articleGautham Menon Refused To Do This One Thing While Acting In “Kannum Kannum” !!

Here’s The 10 Years Challenge Of Kollywood Celebrities !! Some Of Them Will Make You Go ROFL !!