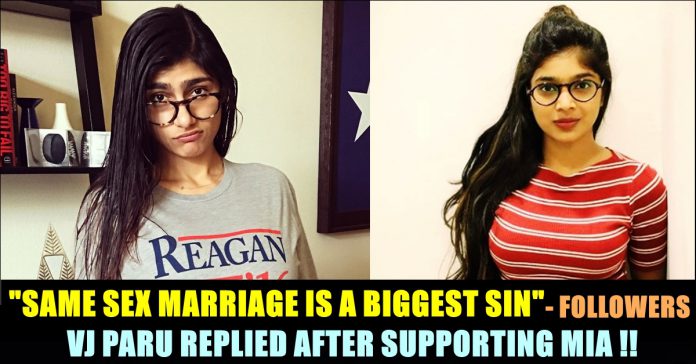 Video jockey Parvathy who is pretty much interactive with her followers in social media platforms, often compared with former adult star Mia Khalifa for the eye glasses she is wearing, recently uploaded a story in her Instagram account supporting the global star. Mia Khalifa recently uploaded a tweet condemning Pope for not blessing a same sex couple.

Sharing the screen shot of these tweets, VJ Parvathy stretched her supportive hand and wrote “Ha Ha Ha. Mia for a reason. Being homosexual is no more abnormal. Common people. Speak up !!”

To this story of the anchor, many of her followers came up with reactions saying that homosexuality is sin. “What non sense is this… Marrying a a same sex gender is good ah.. It is biggest sin in the world… God against those who doing this… chii” wrote a follower whereas another one said “It’s against Christianity, Periya Panjayatha kelapiduvaanga ipdilaam potteenga na”

One more user said “What to speak up ? Are you asking people to encourage/entertain such stuffs which is absolutely against/contrast to the nature ?”. Replying to him Parvathy said “But the society is still against Homosexuality !!! Jesus never said a word about homosexuality. He never said that gay people should be condemned – Jimmy Carter. Love knows no gender. Let’s try to understand “Same sex love”. P.s : On the other side, I appreciate all those family and individuals who respect and support same sex people”

Check out the screen shot of Parvathy’s story below :

Parvathy who is presenting shows for “Galatta” youtube channel, rose to fame among Internet audience after interviewing actor, music director, filmmaker Hip Hop Aadhi. She is enjoying a huge sum of followers in social media platforms and is engaging her followers by uploading the pictures from her photoshoots with motivational quotes and with quotes defining herself.

She is currently enjoying three lakh plus followers for her Instagram account and has posted 644 posts so far. Parvthy recently announced that she going to make her acting debut in Tamil cinema through an upcoming project of Hip Hop Aadhi. She thanked the music composer for changing her life into a whole new direction through her post.