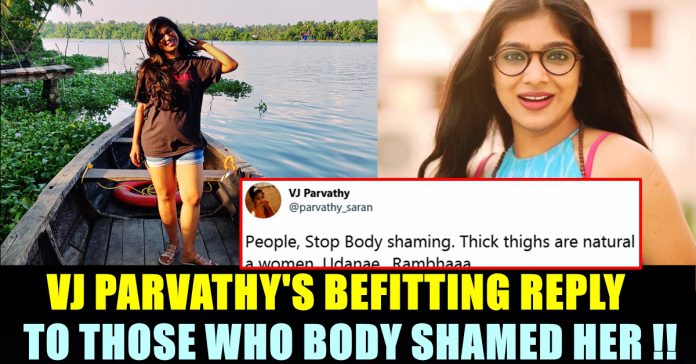 VJ Parvathy Replied To Those Who Body Shamed Her !!

Social media networks have become a great platform for people to connect with each other. Moreover, celebrities also use it for connecting with their fans and to share their daily routine as well as professional updates related to their lives. However, there are some people on these networks who have a hobby of criticising, shaming or trolling others and females who are working in media are their favourite target. There is no doubt that being a female, especially while working in media, is not an easy task as public always keeps an eye on them and their every move is analysed.

Video Jockey Parvathy who is known for hosting shows in Galatta youtube channel, recently made her presence in Vijay TV’s popular show “Cooku with Comali” as a participant. She who has a wide fan following in social media, is very much interactive with her followers as well.

She rose to fame after interviewing music director and actor Hip Hop Aadhi. In the interaction, Aadhi called Parvathy as “Aunty” and the separate video clip went viral in social media platforms. After that Parvathy’s public opinion videos gained a wide reach among public. She is enjoying 2 lakh plus followers across the social media platforms.

Most recently, she uploaded a series of her pictures from state Kerala and the post garnered thousands of likes with various kind of reactions.

Most of the comments her post received were gross. A number of her followers made obscene comments about her body parts as well.

On seeing these comments, Parvathy came up with a tweet saying that it is natural for women and condemned them who body shamed her. “People, Stop Body shaming. Thick thighs are natural for a women. Udanae.. Rambhaaa. Thirumalai Nayakkar Thoooon. Aunty material. Can’t you accept a women the way she looks ? Zero size kekudhooooo ?? Pongadaw dai.” her tweet read.

Previous articleSanjay’s Tweet About Jadeja Getting Attacked From All The Directions !!
Next articleBREAKING : Superstar Rajinikanth Made The Biggest Announcement On His Political Stint !!

English cricketer Ben Stokes, on Monday, broke his silence on the recent "run out" controversy that took place between team India and England for...