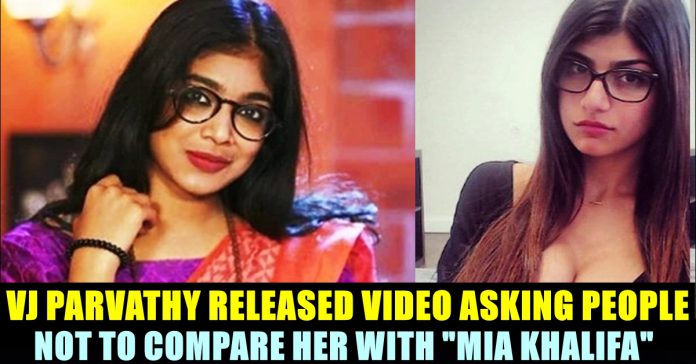 The video jockey who is working in Galatta youtube channel, seems very much interactive to her followers and fans. The way she conducted public opinions show before lockdown impressed youth audience in big time. She initially rose to fame once music director, hero and filmmaker Hip Hop Aadhi called her as “Aunty” and told her that he “sighted” (local term used to define the act of gazing at a person who belongs to opposite gender) her in one of an interview.

The emerging anchor currently enjoying more than 1 lakh followers in Instagram where she received these weirdest questions. To one of a follower who asked Parvathy to reveal her age, she requested him not to question about her age. “Big time secret, please forgive me. It is a good and justifiable age” Parvathy wrote in her story.

To another user who asked whether she is single or committed, Parvathy said that she is very much single. “Waiting for my wild kind of love” she wrote in her story.

Mia Khalifa worked in pornagraphic industry for a long time and left it after finding herself in a controversy for performing sexual acts wearing the Islamic hijab in a video. After leaving that career, Mia transformed into a social media personality and webcam model. She is also doing sports commentary.

Earlier, a follower commented in one of her Instagram post saying that she looks like Mia Khalifa. Parvathy remained calm at that time too as her reply read “Irukkum. Irukkun… Poya Angittu.”

To another follower who asked why everyone is calling her as “Aunty”, Parvathy posted a screenshot of her interview with Hip Hop Tamizha and said “It’s all because of this one interview with Hip Hop Tamizha. Total life changed. I will never ever forget the memes and trolls ppaah. Go watch this interview and find why they are calling me Aunty. But remember I’m not an aunty daw” Parvathy said.

Many of Parvathy’s public interaction video trended in youtube after this interview with Hip Hop tamizha. Comment your views on the way Parvathy replying to her followers !!

DD Neelakandan On How Nayanthara Would React If She Gets Angry !!

DD Neelakandan who is a TV host by profession has a good bonding with few of the big names of Kollywood industry which is...

C M Of Kerala Offered Rs.3000 Per Day For Fishermen Who Helps In Rescue Mission !! The Leader Of Fishermen Refused !!

A leader of fishermen, who have won widespread praise by rescuing hundreds caught up in the Kerala floods, on Monday refused to accept Rs. 3,000 offered...