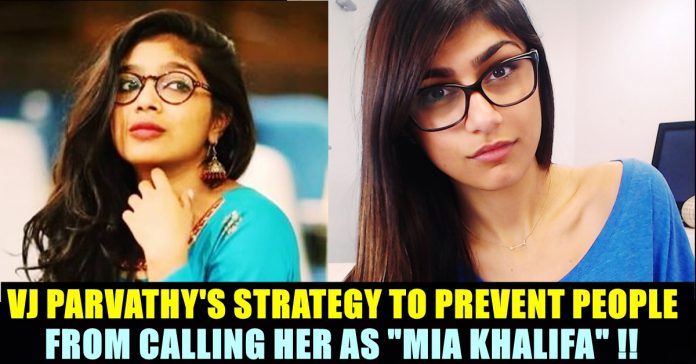 However, her followers didn’t stop comparing them. Now, in a recent interaction with a youtube channel, the video jockey embraced the comparison and proved that she is a new-age anchor with progressive mindset. VJ Parvathy who became a familiar face among Tamilnadu youngsters in a very short span due to her public opinion videos, gained wife fame when music director and actor Hip Hop Aadhi called her as “Aunty” and told her that he “sighted” (local term used to define the act of gazing at a person who belongs to opposite gender) her in one of an interview. The video went extremely viral and the anchor is still being called as “Aunty” irrespective of her original age.

Recently she got into controversy for not mentioning actor Suriya’s name in one of her interaction. However, she handled it with care and overcame it without much damage to her reputation. Now, in one of a recent interaction which was shot four months ago, VJ Paru answered to a question on being compared with Mia Khalifa.

“These guys have no other job at all’ says the anchor with wide laugh in her face. “This is what we call as “stereotyping”. I have eye deficiency. If I remove my glass, I can’t able to see things clearly. That is the only reason behind me wearing this glass. I don’t know why they are comparing me with Mia Khalifa. I think it is because of this glass most probably.” said Parvathy who went on to add how she sees the comparison.

Comment your views on the way she responded to the question !!

Previous articleDhoni Seeked Advice From This Tamil Actress To Join Ziva In School ??
Next articleVijay’s Controversial Speech Against Sri Lanka Re-Surfaced In Internet !!