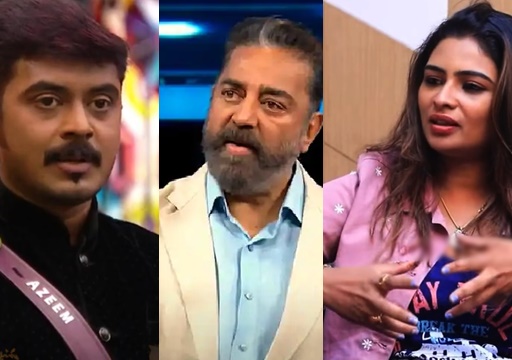 In one of her post Bigg Boss interviews, VJ Maheshwari expressed her disappointment over the derogatory remarks Azeem has been making against women inside the house being sidelined. Maheshwari said that Azeem always degraded women and treated them cheaply and it never got highlighted. She also said that anyone can pretend to be reforming from being a bad person but what matters the most is, the one who stays genuine right from the start.

“I don’t know if I can say this. A lot of things about Azeem has never been addressed. In many episodes, Azeem made comments against women such as ” You don’t know anything”, “You are not fit for it”, “You shut your mouth “, ” You can’t do it by being a woman” sort” Maheshwari said in th interview.

“He kept repeating such phrases inside the house but it never got addressed. We felt whether they were sidelined. We can’t question about the format of a show. Winning it by facing the obstacles is our job. But when it comes to people, even a small gesture were made against Azeem became a huge topic of discussion. For example, that “Breaking news” part” she further said.

“That was never a controversy but when it became a subject to big discussion, he became strong. He started getting stronger by showing his character transformation. He showed that he reformed as a good person from being a bad person and became stronger. It overlapped the contestants who were behaving respectful to others from the start. If this is the case, anyone can portray themselves as a bad person and show transformation to win the contest ” Maheshwari added. “He changed, that’s a good thing but we took the damage” she vented out.

She is extremely correct💯i am disappointed even with host and channel #biggbosstamil6 seems like they predecided he is finalist 😏money can play everywhere https://t.co/cEIF70wJZN

Kamal sir script paathi, his misplaced political message meethi athuvum for the wrong candidates: painful for any kamal sir fan to watch. Vjtv is doing a disservice to this man.

@vijaytelevision script can be anything. Bt @ikamalhaasan thala, u need to address this

Ther r many reports that he is a misogynistic narc. Dont keep him in the show & let him gain followers

Only those who impacted by #Azeem can really feel the pain & hurt he is creating. By supporting a character like him, we are corrupting our society#biggbosstamil6 #biggbosstamil https://t.co/sppeafTW1A

Previous articleTamanna To Get Married To A Business Man?? Actress Revealed Photo
Next articleFollowed By Pradeep, Old Tweets Of G. V Prakash Are Being Dug Up!!

Online abuses became common and it is being faced by every celebrity across the world. A popular K-pop star who had long been the...

Shikhar Dhawan Picked Up Bat For The First Time After Injury !! Got Trolled For This Reason !!