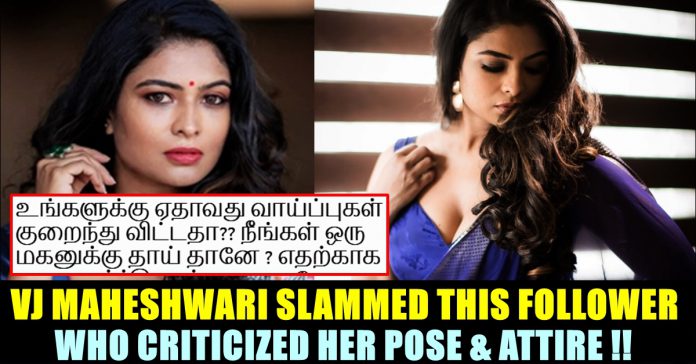 Celebrities such as TV stars and cinema actors are finding various ways to spend their quarantine time. Few of them are involved in Gym workouts and others are reading books. Some of them are creating awareness regarding the COVID 19 virus as well. Most of the celebrities who are having a social media account with enormous number of followers are engaging them by uploading their pictures from their old photoshoots. In the same way, Anchor Maheshwari added a series of pictures of herself from her recent photoshoots. To her bizarre, the former TV anchor got criticized by a number of her followers for her glamorous attire and pose in the post.

Anchor Maheshwari who is known for hosting shows in various prominent channels, slammed those online users who slutshamed her for her pictures.. She is currently hosting a show called as “Comedy Khilladis” and “Petta Rap” in Zee Tamil channel. The Actress gave a come back to her hosting career after giving birth to her baby boy. In her recent post, Maheshwari donned a blue saree and striked a number of elegant poses. “The question isn’t who is going to let me ; it’s who is going to stop me” she added as a caption to her post.

From Sun music to Isai Aruvi, she hosted several shows and appeared in few serials such as Thuyamanavan and Pudhukavithai. She also debuted in tamil film industry through a film named as “Kuyil”. The actress who got upset with the comment made by the user on her recent post, replied to him right away in a way of shutting him down once and for all.

The user, through his comment said, that these kind pictures won’t help her to gain an opportunity in film industry. He asked the actress to be determined and to believe in her talent. Replying to his comment, Maheshwari asked him why he is spending his precious time on giving her his advice. “I am still thinking wat made you think so much .. and take your precious time to give me a piece of your advice for my useless post which is not worth determination … Are you noticing anything in twitter at all which matches your intelligence ???” read the reply of Maheshwari.

I am still thinking wat made you think so much .. and take your precious time to give me a piece of your advice for my useless post which is not worth determination … 🤔🤔 Are you noticing anything in twitter at all which matches your intelligence ??? https://t.co/OqDla16ALT

Another user named as Sathyamoorthy asked Maheshwari why she is uploading such pictures. “You are a boy’s mother right ? I am your fan, these pictures of you disappointed me” he said through his comment.

To his comment, one of a follower of the TV anchor uploaded a screenshot which showed Sathyamoorthy’s “Likes” column. The twitter user liked the “Hot Pictures” of actress Mouny Roy just before commenting on Maheshwari’s post.

Maheshwari showed her support to this comment of her follower by sharing it with “Heart” emojis.

Comment your views on this hypocritical behaviour of Sathyamoorthy towards Mouni Roy and VJ Maheshwari !!