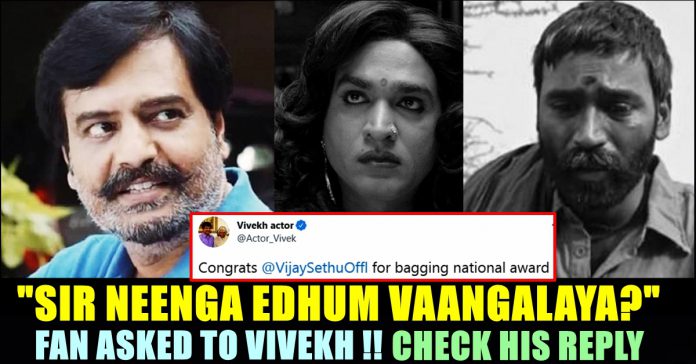 Actor Vivekh’s reply to a fan who asked whether has hasn’t received any national award when he wished Vijay Sethupathi for bagging the award won the hearts of his followers. The actor who is known for his socially responsible activities, said that the love of fans is itself an award and added that he is receiving it for the past 35 years.

The 67th National awards for the films that were released in the year 2019 has been announced on Monday. South Indian cinema has got highly recognised as Marakkar: Arabikadalinte Simham, and Maharshi won the Best Film, and Best Popular Film awards respectively. Dhanush’s role as Sivasami in “Asuran” won him the best actor award for the second time in his acting career. The film also became the best Tamil film. Actor Vijay Sethupathi won his first national award as a supporting actor for acting as a transgender in Thayagaraja Kumararaja’s “Super Deluxe”.

Parthiban’s “Oththa Seruppu” garnered the special jury award and Rasul Pookutty won the national award for his work in the film as well. D.Imman received best music director award for composing music for Ajith kumar’s “Viswasam”. As soon as the announcements were made, people of Tamil social media wished the achievers by uploading posts and reactions.

Among the comments dropped by the followers of him, one of them commented asking whether he hasn’t received any awards for this year. “Sir neenga edhum vangalaya…” read his comment to which Vivekh replied saying that the love of his fans is itself an award for him. “I have been receiving it every year for the past 35 years” the actor said by writing “ரசிகர்களின் அன்பே ஒரு விருது தானே! 35 ஆண்டுகளாக அதை வருடாவருடம் வாங்கிக் கொண்டு இருக்கிறேனே!!!!”

This humble reply from him earned him the immense support of his followers which is evident through the reactions he received. Check out some of the below :