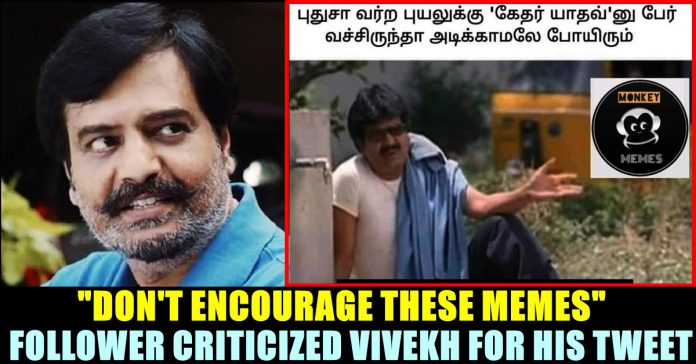 Actor Vivek who is pretty much interactive with his followers in social media platforms, recently reacted to a meme created by a online user by having the popular meme template from his movie “Run”. Appreciating the creativity of such meme creators, the comedy actor said that they “Idea ulla pasanga” (Lads who have creative thoughts).

Comedy Actor Vivekh who is known for his socially responsible opinions in his movies, is no different in his real life as well. He recently grabbed the headlines for the looks he displayed through photoshoots. Even a number of his colleagues from Tamil film industry complimented the comedy actor for his major transformation. Overwhelmed by the response, he also thanked those who helped him to get the look.

It is very well known that scenes from his films are widely being used by netizens for memes. Recently, a follower made a meme making fun of the cyclone “Nivar” by trolling CSK player Kedar Jadhav who failed to perform in the last season. It was a meme template that took place in the film “Run” which was released in the year 2002 by having Madhavan, Meera Jasmine, Vivekh in the lead roles. The film’s comedy scenes became a hit among the fans during its release time and is still ruling the Television comedy channels.

In one of the comedy scenes, Vivek, after getting cheated by miscreants, would try to drink water from a public tap. The abandoned tap would only released air instead of water. On seeing it, Vivek would say that the air could be used for cycles and would say that people in the city are dumb.

Using the template from this film, a follower of Vivek posted a meme writing “The cyclone would have remained calm if it was named “Kedhar Jadhav” the meme’s caption read.

This reply of vivek received 7k likes so far with various kind of reactions. “Jokes apart u as a celebrity u shld not suport these kind of memes , it’s attacking a professional player directly playing at that level isn’t easy , could see continuous target of one player for teams failure” criticized a follower.

Jokes apart u as a celebrity u shld not suport these kind of memes , it's attacking a professional player directly playing at that level isn't easy , could see continuous target of one player for teams failure

Previous articleRamya Pandiyan’s Biased Behaviour Made Her Own Fans To Hate Her !!
Next articleTN Minister Makes A Controversial Statement About Nayanthara & Udhayanithi Stalin !!

Leonardo Di Caprio Gets Trolled For Dumping Girls After Their 25 !!

On the morning of Tuesday, a group of DMK men destroyed one of the "Amma" canteens which is located in Chennai's JJ Nagar. The...