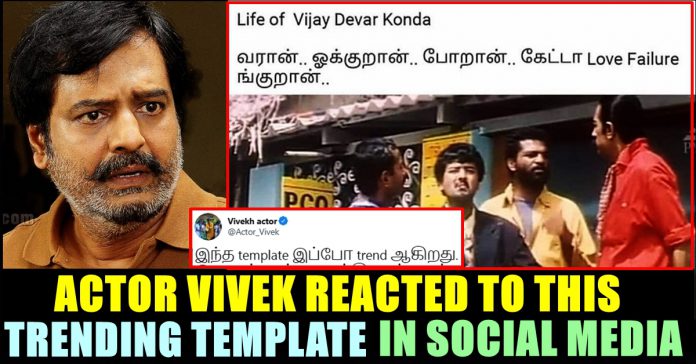 Comedy actor Vivek reacted to the trending meme template which is being used by the netizens for the past couple of days. Without Memes, we must accept that there would be no social media platforms will be active in a way that is now performing. Even extreme high budget films and reality shows needs the help of meme creators in order to make their product reach larger audience.

A meme is an activity, concept, catchphrase, or piece of media that spreads, often as mimicry or for humorous purposes, from person to person through the social media platforms such as Facebook Twitter and Instagram. An Internet meme usually takes the form of an image. A recent example that proved the power of memes is “Nesamani”, a fictional character in a Tamil cinema named as “Friends. The tag trended worldwide only through the help of memes.

In a similar way, actor Vivekh’s particular scene from a movie named as “Sandhitha Velai” trending in Internet as a meme template. In the film, Vivek would have played the role of a jobless youngster who tricks people to get free food. In the particular scene, Vivek who couldn’t pay bill for the tea he drank, would cheat the shop owner by saying a popular dialogue from movie “Devar Magan”.

Check out some of the memes based on this template :

Actor Vivek, regarding the template which is trending, has posted a tweet in his official twitter account. Vivek who is known for his socially responsible opinions in his movies, is no different in his real life as well. Being an ardent follower of legendary Indian scientist Abdul kalam, Vivek requested his followers to trend the template in a positive way by encouraging the act of planting trees.

Upon his request, many of his followers created meme in the way he wished and tagged the actor to which he replied in a positive way. Check out some of their reactions below :

How do you see Vivekh’s attempt of converting the abusive and offensive trend into a positive way ?? Comment your views below !!

Previous articleCheran Opened On What Happened Between Himself & Kamal Haasan For The First Time !! WATCH
Next articleCelebrities Couldn’t Keep Calm On Seeing The Selfie Of Vijay !!

Along with fans, a number of celebrities of Kollywood and other film industries stunned on seeing the trailer of "Vikram", first film of actor...

Vanitha Vijayakumar who walked out of Bigg Boss ultimate, reacted to the recent promos of the Simbu hosting show. The actress said that she...

On Wednesday, Tamilnadu's BJP leader Annamalai came up with a series of tweets criticizing the state's finance minister Palanivel Thiaga Rajan who belongs to...