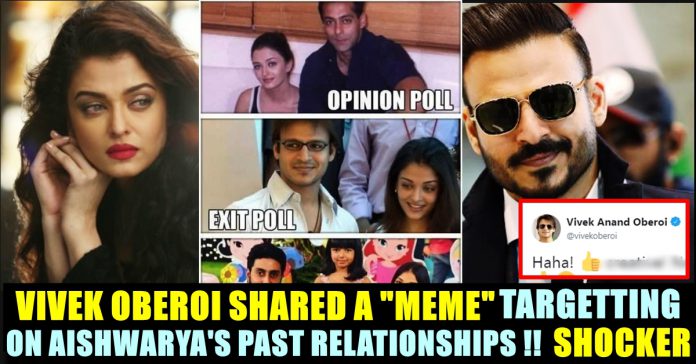 Vivek Oberoi is an Indian film actor. He predominantly appears in Hindi films. He has won a number of awards, including two Filmfare Awards from five nominations. He is the son of Bollywood actor Suresh Oberoi.

As the election result for Lok Sabha election is in near future, the actor has shared a controversial meme in his twitter which is receiving severe hatred. Those who follow Bollywood are very well aware of the entire scenario happened between Salman Khan, Aishwarya Rai Bachchan and Vivek Oberoi years ago.

Vivek Oberoi just shared a meme on Twitter which had a collage of three pictures. First one is of Salman Khan & Aishwarya Rai saying ‘Opinion Poll’, the other is of Aish with him saying ‘Exit Poll’ and the last one is of Abhishek and Aish with the tagline of ‘results’.

The exit polls of Lok Sabha Elections 2019 are currently on and with that, the whole nation is looking forward to the final verdict. Check out some of the reactions for Vivek’s tweet :

It shows how much low level thinking you have.
Do it with your sister & wife ‘s past relationships & photographs too #ShameOnYou 💩

This is in such poor taste.. ones personal life is not to be discussed here.. remember there are 4 individuals who are father/ mother/ brother /sister .. and everyone has moved on .. shame

Get over it. This meme isn’t about you and you know it well. Your disguised and sly attempt of popularizing this crass graphic on aishwarya can only fool some dumb folks here. Jerk!

Vivek will be soon in Narendra Modi’s biopic. The film “PM Narendra Modi”, directed by Omung Kumar B and starring Vivek Oberoi, was scheduled for release on April 11, the first day of polling of the seven-phased Lok Sabha elections. But it was stopped by the EC after complaints by political parties. It will now be released on May 24, a day after the completion of polling.

What do you think on this meme of him ?? Comment your views below !!

Previous articleDid Sj Surya Just Announced His Next Project With Ajith & Vijay Together ?? WATCH !!
Next articleThese Memes On GOT Finale Are Extremely Hilarious !! You Just Can’t Miss These !!

Veteran journalist Nakkheeran Gopal, editor and publisher of Tamil political investigative journal Nakkheeran, is the one who made the horrific Pollachi sexual harassments public...

Udhayanithi Stalin Replied To Those Who Questioned About CCTV Camera !!

Psycho directed by Mysskin is receiving overwhelming response from the audience. The filmmaker who is known for his intense and intriguing movies, directed Psycho...