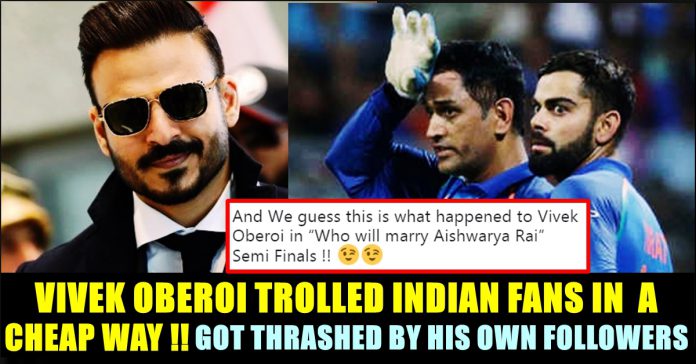 Vivek Oberoi is known for speaking his heart out in his micro blogging social media site, Twitter. Recently he caught in controversy for endorsing a meme that attacked his former girlfriend Aishwarya Rai and her personal life. At that time he received a sum of support from a set of fans who lauded his sense of humour. Now the Vivegam actor became a victim of online troll due to his comment on Indian cricket fans.

As the strong Indian team lost to New zealand in the first semi finals to get out from the world cup, Vivek Oberoi posted a video which trolled Indian fans. The video showed a poor Indian man getting fooled when he tries to hug a foreign woman who ends up hugging her friend.

He added the video with a caption which said “This is what happened to Indian fans in the #WC semi finals! #CWC19 #WorldCupSemiFinal #INDvsNZ #indiavsNewzealand” This tweet indeed did not go well among the fans of Indian fans who trolled him brutally. Here’s some of the trolls he received :

And We guess this is what happened to Vivek Oberoi in “Who will marry Aishwarya Rai” Semi Finals !! 😉😉 pic.twitter.com/NfPyaSIYAx

Exactly what happened to you in the past!. pic.twitter.com/ZVUafie4Lv

Hello mr @vivekoberoi , always thought you were gentleman , last two tweets proved you desevered where you are now .Whatever you are because of your dad , Just don’t ruin it, we are proud of cricket team , they are lot better than and your creepy meme . Jai Hind

Same as u knocked out in semis by mr bachan😉😂😂

Girl is Aish, Abhishek in Black suit and blue t shirt wala is Vivek Oberoi himself.

Vivek Oberoi is perfect for biopic of Sanjay Manjrekar.

I guess this guy can never post something sensible.

Imagine guys.. On this video Chuthia vivek is that guy others are @juniorbachchan and #aishwarya

Team India played exceptionally well in the world cup tournament. Vice captain Rohit Sharma who scored 5 mammoth centuries said that 30 minutes of bad cricket shattered the dreams to lift the cup. Virat Kohli also felt the same and he said that there are some reasons to be proud of as well.

Previous articleRishabh Pant Consoled Indian Fans For Losing In Semi Finals !! Got Extremely Trolled !!
Next article“Me & Anushka Are Always There For You” Virat Gets Emotional On Seeing Ab De’s Statement !!

An ardent fan of actor Ajith Kumar reportedly died while celebrating the release of his idol's film "Thunivu" which was released on 11th of...