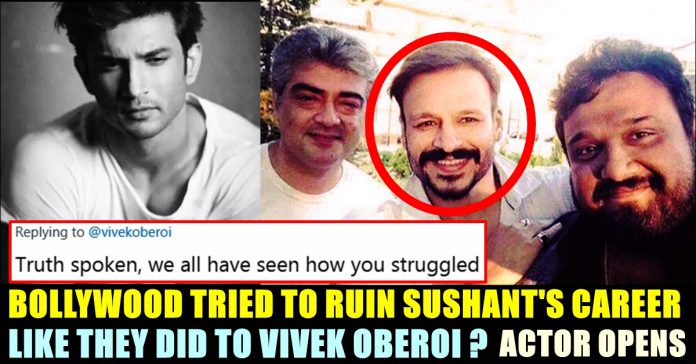 Vivek Oberoi who visited Sushant’s funeral posted an emotional message, saying that Sushant could have reached him before taking such extreme decision. In his long note, Vivek explained how he felt while seeing Sushant’s father lit the fire at the cremation. The actor said that he wish that he could have shared his personal experience to help him ease his pain. “I have been through my own journey of pain, it can be very dark and lonely” said Vivek Oberoi through his post.

During the prime time in his career, Vivek Oberoi dated his Kyun ! Ho gaya na co-star Aishwarya Rai. In 2003, Oberoi claimed that Rai’s former boyfriend Salman Khan had threatened him, and Oberoi and Rai broke up not long afterward. Being a victim of Bollywood’s domination himself, Vivek who was expected to become a brightest star of the Bollywood industry, didn’t last long as a leading actor. He is currently concentrating in doing antagonist roles in South Indian films. His acting stint in Kollywood’s Vivegam, Tollywood’s Vinaya Vidheya Rama and Mollywood’s Lucifer impressed the audience of the respective industry.

In this note, Vivek said that suicide can never be a solution for any problem. Vivek wished Sushant to be alive to witness all the love and care he is receiving today from the fans. “When I saw his father today, having to light the fire at the cremation, the pain in his eyes was unbearable. When I heard his sister weeping, begging for him to come back, I can’t express how deeply tragic it felt” Vivek wrote in his post.

Further Vivek went on to address the industry of Bollywood films and asked them to conduct some serious introspection. “We need to change for the better, we need to bitch less and care more, less power play and more grace and large heartedness, less ego trips and more acknowledgement for deserving talents, this family needs to truly become a family” the actor said in his post.

Vivek Oberoi expressed his wish of Bollywood becoming a place where talent is nurtured not crushed. He wanted Bollywood to be a place where an artist feels appreciated rather than being manipulated. Vivek said that it is a wake up call for the entire Bollywood industry.

“I will miss the ever smiling Sushant Singh Rajput, I pray god takes away all that pain you felt my brother and gives strength to your family to deal with their loss. I pray you are in a better place now, maybe we didn’t deserve you” the post of Vivek read.

Many people in the comment section blamed a “group” bollywood’s high profile stars created for themselves. It is highly believed that Sushant got completely ignored by the industry of Bollywood. A similar statement was released by Kangana Ranaut as well.

Check out some of the reactions for this tweet of Vivek below :

From Shahrukh Khan,Salman Khan, Karan Johar, Alia Bhatt to all those other stars who are known to be a "group" and keep other stars away from limelight…..are responsible!!!!!
No matter how much they cry now….!!!#BoycottKaranJohar #BoycottAliaBhatt #BoycottBollywood

Sorry this is not a suicide.. it is a murder n bloody karan johar is a criminal ….. 😠😠

Truth spoken, we all have seen how you struggled as well.

I remember how Vivek ji had great success as an actor at the start of his career and how #Nepotism had negative impact on his career.
Shame on #bollywoodmafia

You’re truly a great human being. Sadly bollywood was really unfair to you. They did so much bad to you but we all wish you best of luck for future. Om Shanti Sushant. 🙏

Raju who became the winner of Bigg Boss season 5 started appearing for youtube interviews. The upcoming star who is currently spending his 7...