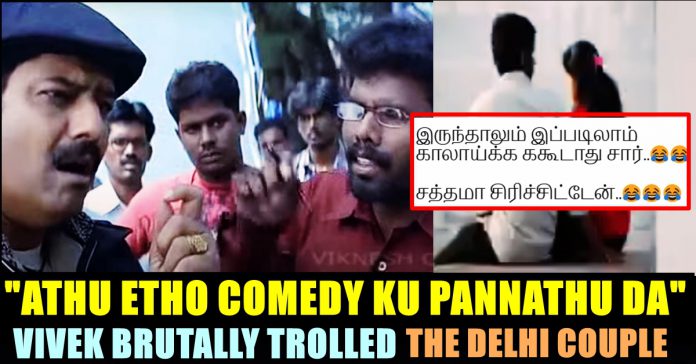 Vivek Compares The Famous Delhi Couple With His Popular Comedy !!

Actor Vivek reacted to the sensational news which reported that Corona virus is spreading among people who were involved in multiple affairs while having relationship. The actor compared it to one of his popular comedy in a movie where he would come know about affairs in TV serials. He asked romantic couples not to make his comedy true while replying to one of a twitter user.

A news on a Delhi couple getting infected by Coronavirus is doing rounds in social media platforms for pat couple of days. The news says that a couple got detected with Coronavirus in Delhi. During Police investigation, it has came to light that the girl allegedly had relationship with 3 other men. After knowing about it, authorities isolated all the three members.

To our shock, one of those three men, reportedly had relationship with two women. Both of them also got isolated to avoid spreading the virus. Now, one of those two women received many calls from multiple men, result of which, the case has been transferred to CB CID.

Couple detected with #Corona in Delhi.! But the girl allegedly has affair with three other men who are also under observation now. In a new twist, out of three, a man has two more other girl friends. Out of those two one is suspected to have more bfs.pic.twitter.com/vQBBeoyF4o

This news went extremely viral across the platforms of social media. Many made fun of this news by creating memes and trolls. One of a fan compared this news with a popular comedy scene of actor Vivek to which the actor replied by asking them not to make his comedy true by involving in such activitites. “அட பாவிங்களா !!காதலர்களா!!ஏதோ காமெடிக்கு பண்னுனத இப்படி உண்மை ஆக்காதீங்கடா!” his tweet read.

Check out some of the other reactions for the news below :

So now case is handover to CB CID😂😂 pic.twitter.com/AEUivocFKQ

In India 27,892 people has been tested positive for coronavirus so far and the death toll raised to 872. The lockdown 2.0 which is nearing its end is likely to get extended to avoid community spread in the country.

Indian pacer Jaspirit Bumrah made his presence in social media platforms for the first time after the finals of World Test Championship and got...

This Shake From Vijay Sethupathi As “Shilpa” Goes Viral On Internet !! Check Reactions !!