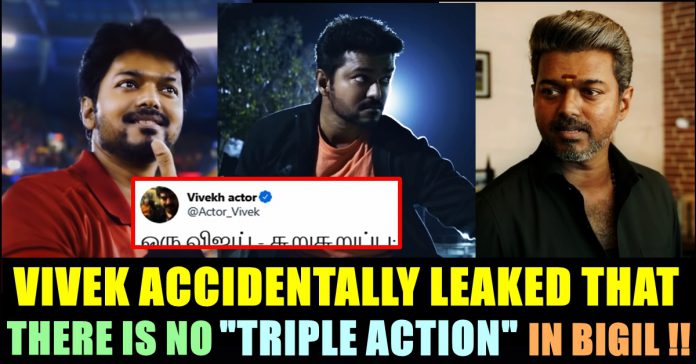 Bigil is one of the most anticipated films of the year 2019 and is expected to hit the screen on Diwali day. In a way of adding fuel to the expectation level, the makers of the movie released the first ever official trailer of “Bigil” only to set the Internet in fire.

Since the trailer surfaced on Internet, fans of Actor Vijay from all over the world are reacting to it in a positive way and are trending it in social media platforms. As soon as the trailer released, it reached more than 1 million likes in a matter of minutes and is marching towards 3 million soon.

Now, in a way of clearing the air, actor Vivek who is also playing one of a character in the film, revealed about it without his own knowledge. To appreciate the trailer which was released yesterday, the legendary comedy actor mentioned only two characters of Vijay and made an unofficial confirmation to the confused fans that Vijay is appearing only in “Double-action” in the movie.

On seeing this tweet, fans got extremely happy and started expressing their speculations. One of a fan, after seeing this tweet of Vivekh said that the name “BIGIL” is team’s name and Vijay’s character names for old get up and young get up are Rayappan and Michael respectively.

Did he just spoil that are only two roles played by Vijay!? 😅

Produced by AGS Entertainments, Bigil has Nayanthara as lead lady. Kathir, Vivek, Yogi Babu, Indhuja Ravichander, Jackie Sheroff, Daniel Balaji are some of the other actors took part in the film. It is notable that the movie marks the third collaboration between Atlee and Vijay after Theri and Mersal.

What do you think on the trailer of Bigil ?? Comment your views below !!

Report about one more girl student killing herself in her school hostel has created outrage in state Tamil nadu. As soon as the incident...