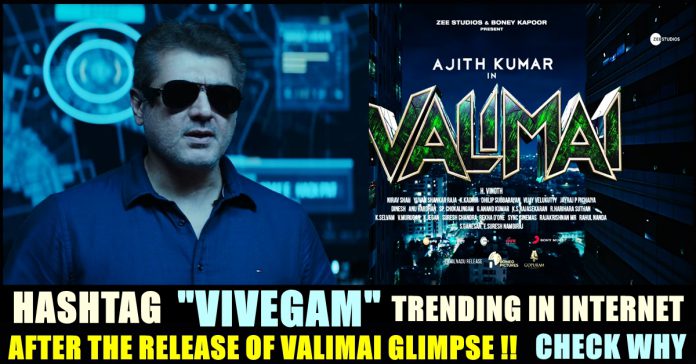 “Vivegam” Trending After The Release Of “Valimai” Glimpse !! Check Why

Hashtag “Vivegam” is trending in the micro blogging social media site, as soon as the makers of Ajith’s upcoming movie “Valimai” released the glimpse of the film in youtube. Without any prior announcement, Producers of “Valimai” released an 86 seconds long video of the film, titling it as “Glimpses of Valimai”. Fans got excited and has been assuming that the story of the Ajith starrer which has Telugu actor Karthikeyan in the antagonist role.

After two years of making, the makers have released the first video look on Thursday evening. The video opens with dirt bike riders performing stunts in the mid air, hinting that there will be a lot of bike stunts in the film, not in the road but in the air. The character name of Arjun has been revealed as Arjun and the actor makes his entry through a traditional Tamil cinema opening shot for a protagonist.

The actor performs several stunts with his bike and stuns his fans by jumping from one building to another by seating on his bike. Valimai, directed by H. Vinoth, is touted to be a cop drama and the film’s shooting got completed in Russia recently. The film is currently in a post production stage and is expected to clash with Vijay’s “Beast” during “Pongal”.

Watch the video of the glimpse below :

Fans of the actor are celebrating the release of the teaser with trending hashtags such as “Valimai”, “Thala” etc. Meanwhile, hashtag “Vivegam” is also being trended by a set of fans. Pointing out the similarities between the shots displayed in “Valimai” teaser and “Vivegam” film, a group of twitter users are trending the hashtag “Vivegam” and “Vivegam 2”. Most of the fans who are uploading such tweets are donning the display pictures with actor Vijay’s photo.

All the promo materials so far has been highly disappointing

Just Vivegam vibes all over

Comment your views on Valimai getting compared with Vivegam !!

This Former Indian Team Captain’s Gesture Towards A Girl Fan Will Win Your Heart !! Check Out !!

A video of Bigg Boss contestant Azeem requesting the cash rich show's head not to telecast one of his videos, is going viral in...