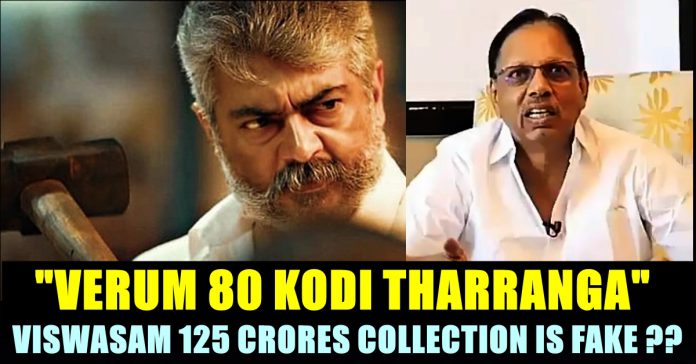 Ajith’s Viswasam and Rajinikanth’s Petta had a dream run at the box office, thanks to the Pongal holidays. Viswasam directed by Siruthai Siva stars Ajith, Nayanthara, Jagapati Babu and Baby Anikha in the lead roles.

Trade reports suggested that Viswasam’s theatre count in Tamil Nadu is higher than Rajinikanth’s Petta as the latter announced the release date just three weeks ahead of the scheduled release.

KJR Studios, who had distributed Viswasam, officially announced the box office collection of the film. According to their Twitter post, the film has collected Rs 125 crore in Tamil Nadu in eight days of its theatrical run. The film reportedly collected 190 crores on the whole.

Now, to our shock, popular distributor Tirupur Subramaniyam has came up with a shocking revelation saying that the film hasn’t collected even 100 crores. In the video he says, “I don’t want to mention the movie’s name. Recently two movies of big heroes released and fans of both of them involved in verbal spat. One of the movie producer says that his film collected 100 crores and the other one says that his film collected 125 crores. Then he says that it collected 150 crores.” he said in the interview.

Distributor #TiruppurSubramaniam say that #Viswasam 125 Cr in TN is a Fake News by @kjr_studios for movie promotion..

“Then while submitting the accounts, he gives only 80 crores. When the producer questions about the amount he posted in twitter, he says that he did it due to the pressure of fans.’ he added.

It is notable that Tirupur Subramanyam, along with Karthick Subbaraj announced that Petta collected 100 crores in 11 days during the release time of “Petta” and said that it is a very profitable film for producers and theatre owners.

Both Viswasam and Petta were released on the same day, 10th January 2019. As soon as the video of Tirupur Subramanyan surfaced many fans of Tamil cinema started reacting to it.

While Viswasam, which is directed by Siva, also stars Nayanthara as the female lead along with Anikha, Jagapathi Babu, Vivek, Thambi Ramiah and Yogi Babu, the Rajinikanth-starrer, which is directed by Karthik Subburaj has Simran, Trisha, Vijay Setupathi, Nawazuddin Siddiqui, Sasikumar and Bobby Simhaa in supporting roles.

Ahead of state assembly polls, Rahul Gandhi is aggressively campaigning in Tamil Nadu. On Monday, a video of himself performing a push up challenge...

After seeing a video of an elderly woman offering money to a person who provided food to her, happening South Indian music director Thaman...

Pawan Kalyan's most awaited "Vakkeel Saab" movie released in theatres on 9th of April and is making headlines since then. The film which is...