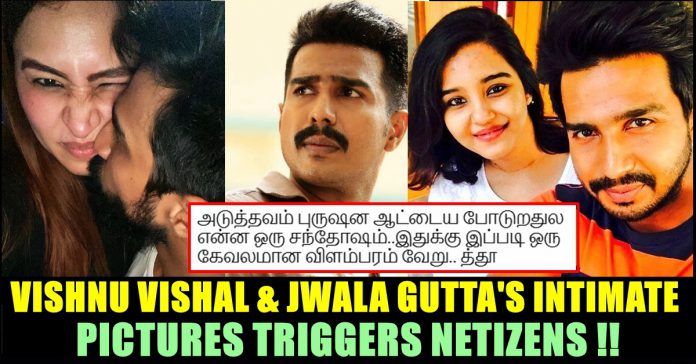 Vishnu Vishal is one of a very few emerging actors who loves doing experiments in his films. He is the protagonist of the first Time travel film in Tamil. Vishnu Vishal’s recent blockbuster “Ratchasan” was highly appreciated by the audience. Vishnu Vishal is an Indian film actor and producer who has appears in Tamil language films. He started his acting career in the year 2009 playing the lead role in the sports film Vennila Kabadi Kuzhu, winning acclaim for his portrayal. Vishnu won further acclaim for his role in Neerparavai, portraying a fisherman.

He announced about his divorce with his wife and long time girlfriend Rajini on November 13, 2018. The news had left everyone in shock. However the actor now getting back to normal it seems. Badminton star Jwala Gutta and the “Ratchasan” actor are spending some valuable times which is evident through their timeline of social media accounts.

On the new year day, Jwala shared some cosy pictures of themselves in her official twitter account. She wished her followers, a happy new year as well. Vishnu who was busy in shooting for his upcoming film “FIR” reached Hyderabad to celebrate the new year with Jwala, according to reports.

In an earlier interview to the Times of India, Vishnu Vishal said, “We’ve known each other for a year or so now. We’ve made lots of common friends. So, we often spend time together with friends.”

The Ratsasan actor also opened up about their relationship. “We like each other as individuals and anything beyond that, at this point of time, is too early for me to comment. Yes, there’s a liking for each other, but for both of us, it’s [relationship] just taking a back seat because we have a lot of work professionally,” he added.

However few of their followers didn’t feel quiet good about the new relationship of actor Vishnu Vishal. They expressed their thoughts through comments. Check out some of them below :

So this was the reason for the separation of Vishnu Vishal and his wife !! Sync aayidichu 🤘🤪😂

“You can’t force anyone. I can’t digest [that it ended]. But I must. For the good of my son… (pause)… and hers. I seriously like her even today, and I know she likes me back. She is a good person, and she knows I am too. But I think, sometimes, the universe doesn’t want you to be together. I’m a sportsman. I am used to failures, and bouncing back from them.” said Vishnu in an earlier interview regarding the divorce. Vishnu and Rajini gave birth to a baby boy named Aryan in 2017.

“Smithika is so matured, she is the one who advising us and she also the one who is so emotional who will shed tears...