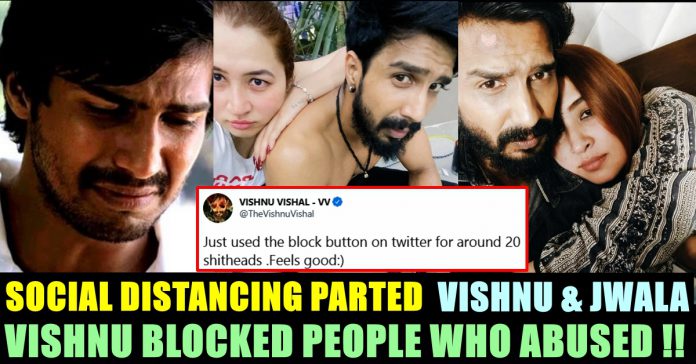 Not only industrialists and entrepreneurs are suffering due to this 21 days lockdown, people who are in relationships are also experiencing the worst phase of their lifetime. They are finding it real hard to spend this Quarantine period without seeing their loved ones it seems. Actor Vishnu Vishal and his new girlfriend Gutta Jwala are acted as the representative of those couples through their Twitter interaction.

Vishnu Vishal was last seen in “Silukkuvarpatti Singam” but grabbed the audience’s attention through his crime thriller “Ratchasan”. Despite of the movie getting acclaimed critically and commercially, the actor couldn’t see a single release in the year 2019. As we all know, Vishnu got separated from his wife with whom he got married and lived 11 years together. They had a baby and the separation didn’t allow him to be with him as well.

He announced about his divorce with his wife and long time girlfriend Rajini on November 13, 2018. The news had left everyone in shock. However the actor now getting back to normal it seems. Badminton star Jwala Gutta and the “Ratchasan” actor are spending some valuable times which is evident through their timeline of social media accounts.

Reacting to the 21 days of lockdown where people are not supposed to meet each other, Jwala expressed her emotion by sharing a couple of pictures of themselves in Twitter. She wrote “Missing my boo” as a caption to her post. Here’s her post :

Jwala replied with a heart and kissing emoji to her dear one :

Meanwhile, in a way of reacting to the negative comments for their interaction, Vishnu Vishal blocked 20 people and posted about it as a tweet.

Just used the block button on twitter for around 20 shitheads .Feels good:)

Further Vishnu, through one of his tweet said that those kind of people deserve such treatment :

Bro relax..shit heads only hav shit in their head.they can only think,eat,talk,act n behave wat we and other living organisms excrete.we either flush it off or walk away from shit .so use ur block button .😊so called few worshippers can never do nythin good in life ..

To one of a user who abused and deleted his comment later, both Vishnu and Jwala slammed him.

On the work front, Vishnu is all set to be seen in Kaadan, Jagajala Killadi and F.I.R whereas Jwala is very much busy in participating badminton tournaments. Comment your views on the way this adorable couple shared their love !!

S.Ve Shekar Confessed About The Black Money Circulation Of BJP In The Tamil nadu Assembly Election ??

Is This Nayanthara ?? Oldest Video Of Her Goes Viral !!

Nayanthara is one of the very few female actors who rules Tamil film industry for more than 15 years. Today, she is the highest...

In a first of its kind of crime, A 26 year old woman named Sandhiya caught marrying for the 7th time in her lifetime...