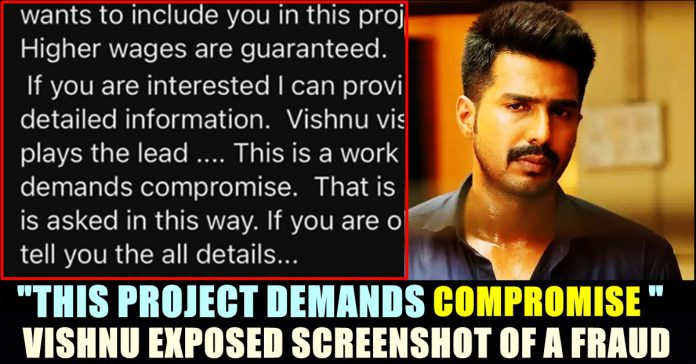 Lately, we have been witnessing numerous scams based on crooks trying to loot money from aspiring actors and misbehaving with women who are trying to get into film industry. Many heroines who got succeeded through their hard work, had exposed about the scams they faced during the initial stage of their career. Now, on seeing his name being misused, actor Vishnu Vishal who is known among Tamil cinema audience for acting in blockbuster films such as “Ratchasan”, “Indru Netru Naalai”, “Vennila Kabadi Kuzhu” came up with a post alerting actresses not to fall prey for the miscreant.

Vishnu Vishal is one of the very few emerging actors in Tamil film industry who loves doing experiments through his films. He is the protagonist of the first Time travel film in Tamil and his recent blockbuster “Ratchasan” was highly appreciated by the audience and by the critics as well. His emotional sports dramas such as “Vennila Kabadi Kuzhu” and “Jeeva” did well in the box office as well.

The actor who is currently busy with a couple of projects, got baffled on seeing a screenshot of an Instagram story which involved his name. As soon as seeing it, he who decided to alert the public before giving a police complaint, uploaded a post in his social media accounts.

The screenshot which seems to be a message sent to someone in Instagram, says that it is for an inquiry for a movie project. The handle name reads “Mathan” and he says that a Tamil movie is being made with a new producer funding for it. He says that the producer wants to cast someone in the receiving end of the Instagram text and vouches for a detailed information, high wages etc.

He further says that the project which has actor Vishnu Vishal in the lead demands “compromise”. “That is why it is asked this way. If you are ok I will tell you all the details” he says through his Instagram account which has zero followers.

Sharing the screenshot in his official twitter account, Vishnu alerted all the aspiring aspiring actresses to be aware. He requested them not to believe people who are misusing his name for wrong reasons. The actor, after expressing his condemnation, made it clear that he is not doing projects for other banners at the moment. He also confirmed that he will be filing a police complaint against the Instagram id.

“To all aspiring actresses. Please beware of such people who are trying to misuse my name for wrong reasons. I strongly condemn such people and such nonsense. Also i am not doing any movie outside my own banner at the moment. Its an instagram id. Will file a complain soon.” read the tweet of the actor.

To all aspiring actresses

Please beware of such people who are trying to misuse my name for wrong reasons.
I strongly condemn such people and such nonsense.
Also i am not doing any movie outside my own banner at the moment.
Its an instagram id.
Will file a complain soon. pic.twitter.com/HligAq9ECq

Previous articleDhanush Sets Internet On Fire By Joining The Cast Of “The Gray Man” !!
Next articleAshwin Communicates With This Player In Tamil !! Fans Can’t Keep Calm

Actor Vijay who is awaiting for the release of his "Master", has announced about his next project. Collaborating with Sun pictures after Sarkar, Vijay,...

Meera Mithun is keeping the followers of her social media accounts busy by uploading videos and posting controversial tweets. If you are aware of...