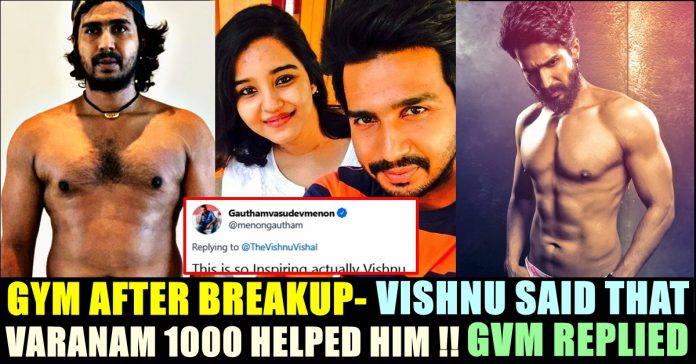 Gautham Vasudev Menon has inspired a lot of youngsters on how to live their life. We have seen a whole lot of Engineering graduates trying their hand in filmmaking only after his movie Vinnai Thaandi Varuvaya released. Through Vettaiyadu Vilayadu and Kaaka Kaaka, he invented a new way of telling stylish police stories in Tamil cinema. The filmmaker indeed a trendsetter which is evident through the trends he set through his movies since Minnale.

The very term “Six Pack” emerged among Tamil speaking youngsters only after the arrival of Gautham Menon’s Vaaranam Aayiram. In the film, protagonist Surya who faces a love failure would rebuilt himself by hitting the gym. This inspired many youngsters to join gym and to build abs in their bodies. The latest one to join the list is Vishnu Vishal, a popular actor in Tamil film industry.

Vishnu Vishal who was last seen in “Silukkuvarpatti Singam” but grabbed the audience’s attention through his crime thriller “Ratchasan”. Despite of the movie getting acclaimed critically and commercially, the actor couldn’t see a single release in the year 2019. Now the actor has came up with a post in his social media account, sharing the trauma he went through for past two and half years. As we all know, Vishnu got separated from his wife with whom he got married and lived 11 years together. They had a baby and the separation didn’t allow him to be with him as well.

Titling the post as “I took the VAARANAM AAYIRAM way 💪” Vishnu shared how things didn’t go well in his life for the past days. According to his post, Vishnu, after getting separated from his wife, happened to suffer a major injury while shooting for a movie of director Prabhu Solomon. The accident forced him to take 2 months of bed rest, which resulted in the actor gaining 11 kgs of body weight and losing 8 amazing projects with various production houses. He even said that his own production house faced severe financial loses.

“Divorce, separation from my child, physical illness, financial loses, injury during shoot-disc prolapse, alcoholism. eating disorders and my weight gain- I felt like I had hit rock bottom, I was felt completely disillusioned and helpless” Vishnu wrote in his post. However, the actor shared to his followers about how he overcame all the struggles he had in his life.

The actor said that he started working out under a professional trainer started eating healthy, restricted alcohol, practiced yoga, cut judgemental people out of his life, blocked negative people on social media, spent more time with his family and friends to focus on himself and his work.

Sharing the pictures of his transformation, Vishnu said that he wanted to show the Abs that he built in his mind. Check out the transformation pictures below :

Vishnu wrote “P.S – Sorry for the long letter but i had to put my heart out to all my lovely fans and friends 🙂 🤗😘” in the caption of the post. Check out it below :

I took the VAARANAM AAYIRAM way 💪

P.S – Sorry for the long letter but i had to put my heart out to all my lovely fans and friends 🙂 🤗😘
#motivation #lifelessons #thewayback #train #painandgain #facingchallenges pic.twitter.com/jKWHzahoHR

Gautham Vasudev Menon who saw this post, immediately replied by saying that it is so much inspiring. “Thank you for letting us know. And that the Vaaranam Aayiram way works!” in his reply.

This is so Inspiring actually Vishnu. Thank you for letting us know. And that the Vaaranam Aayiram way works!

Here’s how Vishu replied to it :

Thank you for inspiring me sir and yes it sure does work 💪 Another powerful example of quality cinema meeting reality and staying relevant over the years 🙂 https://t.co/CZCV5eYmYg

The old video of a small boy doing pooja sitting in a pan with hot boiling water which got surfaced on the internet in...

The popular intruder Jarvo entered field once again and this time, he physically contacted with English batsman Johnny Bairstow which baffled the entire cricket...