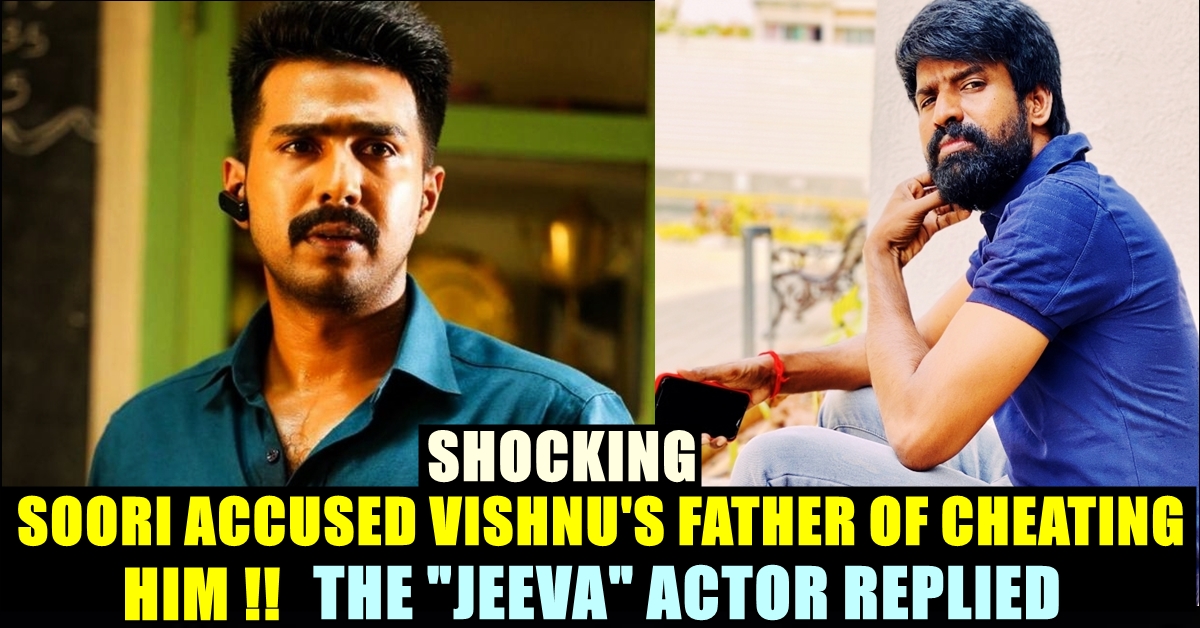 After actor Soori made a shocking allegation against producer Anbuvel Rajan and Ramesh, actor Vishnu Vishal’s father, the “Jeeva” actor came up with a reply completely denying it. Producer Anbuvel Rajan and Ramesh, have been charged with defrauding Rs.2.70 crores according to Times of India. Soori reportedly alleged that the money was transferred to them after they promised him of buying him a land property. Soorai also accused Producer Anbuvel for not paying him the remuneration of Rs.40 lakh for acting in the film “Veera Dheera Sooran”. A formal complaint has been received by police officials from Soori and the investigations had started.

This came in as a shock to Kollywood fans as they believed Vishnu and Soori are good friends. The duo had acted in 7 films together including Vennila Kabadi Kuzhu and Jeeva. Now, Vishnu has came up with a reply denying the accusation of actor Soori. In his press release, Vishnu alleged that it is Soori who has to pay back the advance amount he was paid in 2017 to his production house. The actor said that Soori was committed by his production house for a film named as “Kavariman Paramparai” but the film got dropped due to unknown reasons.

“It is so shocking and painful to read such false allegations against me and my father. Obviously vested interests are working. In fact, Mr Suri has to refund Vishnu Vishal Studioz an advance paid to him in 2017 for a film Kavarimaan Parambarai which eventually was dropped. We have complete faith in law and judiciary system. It may not be appropriate to elaborate further at this point in time and we will strictly go by what law permits. Fans and well wishers are requested to await till the moment of truth emerges. Also request media to report on this with correct facts. Once things are clear i will take proper action within the limits of law.” the press release of the actor read.

“ITS EASY TO ACCUSE OTHERS, HARDER TO CHECK ON YOURSELF – BLESS” Vishnu Vishal added in his tweet while sharing the press note.

ITS EASY TO ACCUSE OTHERS
HARDER TO CHECK ON YOURSELF
– BLESS#MOMENTOFTRUTH#உண்மைஒருநாள்வெல்லும் pic.twitter.com/nXaV7bLM9E

Vishnu Vishal debuted through Suseendhran’s “Vennila Kabadi Kuzhu” through which Soori gained a widespread acclaim. After that, the duo went on to feature in a number of successful ventures. Now, this rift between them has left in a shocked state.