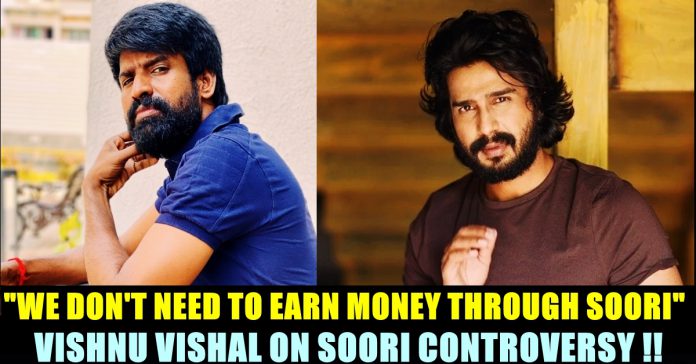 Vishnu vishal who interacted with the press reporters ahead of his film Kaadan’s release, opened on the legal issue he is having with comedy actor Soori and got emotional. The actor also revealed about the struggles he had in delivering films even after acting in “Ratchasan” which became a huge blockbuster during its release time.

During October month of 2020, Soori made a shocking allegation against producer Anbuvel Rajan and Ramesh, actor Vishnu Vishal’s father for allegedly defrauding Rs.2.70 crores according to Times of India. Soori reportedly alleged that the money was transferred to them after they promised him of buying him a land property. Soorai also accused Producer Anbuvel for not paying him the remuneration of Rs.40 lakh for acting in the film “Veera Dheera Sooran”.

Vishnu completely denied the accusation of actor Soori and alleged that it is Soori who has to pay back the advance amount he was paid in 2017. The actor said that Soori was committed by his production house for a film named as “Kavariman Paramparai” which was dropped due to unknown reasons.

“It is so shocking and painful to read such false allegations against me and my father. Obviously vested interests are working. In fact, Mr Suri has to refund Vishnu Vishal Studioz an advance paid to him in 2017 for a film Kavarimaan Parambarai which eventually was dropped. We have complete faith in law and judiciary system. It may not be appropriate to elaborate further at this point in time and we will strictly go by what law permits. Fans and well wishers are requested to await till the moment of truth emerges. Also request media to report on this with correct facts. Once things are clear i will take proper action within the limits of law.” the press release of the actor read.

It is notable that Vishnu and Soori acted together in 7 films. Now, while interacting with the press reporters, Vishnu Vishal said that he and his father doesn’t have the necessity to live with Soori’s money. “I could break down the complaint registered by him. But we have been friends for 10 long years. There will be no difference between him and myself if I disclose about the details of it” Vishnu said.

“We have no connection with the land transaction. Someone who fell on the feet of my father and praised him as “God”, is now accusing him of cheating. If we think about it deeply, we don’t have the necessity to cheat him. I don’t need to earn through Soori as I have learnt and my father became an IPS officer after working as a coolie.” the actor added.

Actor Ajith kumar who is known for his massive fan following, lost one of his ardent fans on Wednesday and the entire Tamil internet...

Political parties of state Tamil nadu are busy campaigning for the upcoming assembly polls. The Election Commission of India announced the schedule for...