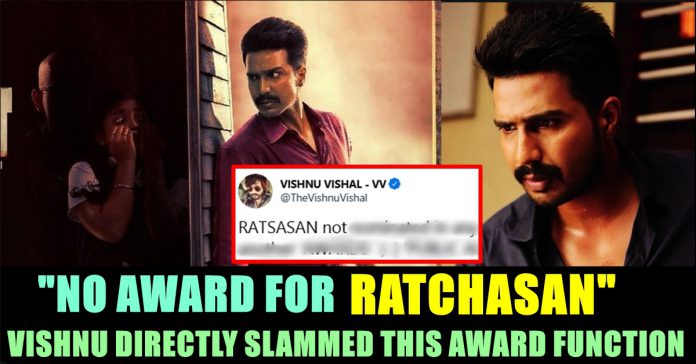 Vishnu Vishal is one of a very few emerging actors who loves to experiment himself in films. He is the protagonist of the first Time travel film in Tamil. Vishnu Vishal’s recent blockbuster “Ratchasan” released was highly appreciated by the audience. However, the actor feels that the film doesn’t received proper recognition till.

Despite a long theatrical run and positive word of mouth, the film did not get nominated in any category in SIIMA awards. South Indian International Movie Awards is one of the popular award ceremonies down south. Each year, the best of all four South Indian film industries are chosen by a jury and honoured under different categories. The winners of Telugu and Kannada cinema were announced on the first day of the two-day event.

On the second day, the winners of Tamil and Malayalam cinema were announced. Actor Dhanush, Trisha, Jayam Ravi, and Anirudh Ravichandran won big at the event. On seeing his film not getting recognised, Vishnu, in his official twitter account wrote “RATSASAN not nominated in any category in yet another ‘AWARDS’ 🙂 🙂 ‘PUBLIC ACCEPTANCE IS THE REAL AWARD’ ….thank u all for the luv u hav showered on this movie:)  @dir_ramkumar IM PROUD OF UR SCREENPLAY 🤗💪 and @GhibranOfficial BGM 🙏@Sanlokesh EDIT pattern “

RATSASAN not nominated in any category in yet another ‘AWARDS’ 🙂 🙂 ‘PUBLIC ACCEPTANCE IS THE REAL AWARD’ ….thank u all for the luv u hav showered on this movie:) @dir_ramkumar IM PROUD OF UR SCREENPLAY 🤗💪 and @GhibranOfficial BGM 🙏 n @Sanlokesh EDIT pattern 🤘 pic.twitter.com/K5G4EofXxd

This tweet from the actor went viral and his co-stars started supporting Raatchasan for impressing the audience :

Makkal theerpe magesan theerpu 😊💛 your film has won the hearts of every single person ! Not one who disliked it ! I think that’s the biggest award anyone can receive ! Peoples appreciation has no form, no structure , no name tags !!
JUS LOVE 💛 https://t.co/fuqVs3mBTP