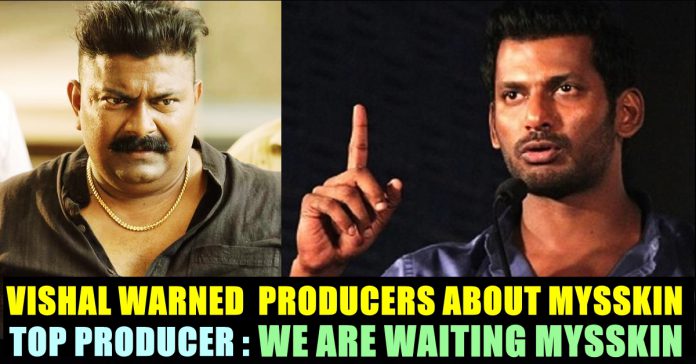 One of the most controversial issue in Kollywood lately is the rift between actor Vishal and director Mysskin. The Director-actor duo had a strong bonding between them for past three years and parted their ways due to financial issues. Vishal accused Mysskin for wasting his money during the making of Thupparivalan 2. In his press release Mysskin said that Vishal spent Rs.35 lakhs to write the script alone.

Seeking your blessings & wishes for my directorial debut & hoping to do the best as a Director#Thupparivaalan2 #VishalDirection1 pic.twitter.com/5CnGYlmsrD

“Is it wrong if a producer pinpoints the mistakes of a Director during the production of the film, for its betterment especially when close to 15 lakhs INR per day was spent for a 3 or 4 hours of shoot in UK ? No” Vishal said in his statement. “I still wonder because it’s as bad as you abandon your own kid an orphanage” he added. Vishal warned other producers of Tamil film industry about Mysskin.

Now, to our shock, Vels Film International of Ishari K Ganesh posted a reply tweet to Vishal’s press release by proposing a collaboration with Mysskin. The tweet which was written in a way of mocking the Vishal’s accusation read “Mysskin Sir, We always believe in you and your script, #Vels is ready when you are ready !!!” by adding a hashtag “Karuppu Raja Vellai Raja” which was film supposed to be done by Vishal.

#Mysskin Sir, We always believe in you and your script, #Vels is ready when you are ready !!!

He support Miskin only reason for Vishal, Because he hate vishal. Otherwise he is nothing to do for miskin in future. This tweet only for Audience attention & against Vishal

Super sir. Myskin sir is a jem. These kind of producers are needed to explore him.

On Thursday, Mysskin came up with a clarification regarding the issue. He completely denied the accusations of Vishal and asked him to provide the proofs for his accusations. “He (Vishal) claimed that I spent 35 lakhs to write the script. I want media portals which tarnished my image yesterday to ask him for the proof. I can provide evidence for spending 7 lakh in the 7.5 lakh he gave me” he said in his speech.

Further the filmmaker went on to reveal that his current pay scale is the main reason behind their rift. “Three years back I directed Thupparivalan for Rs. 3 crore. Now he wants me to work for the same salary. When I refused and walked off, he abused my mother with foul language.” said an emotional Mysskin.

Comment your views on this response from Ishari K Ganesh !!

Previous articleRiythvika Responded To A Guy Who Criticized Her Looks !!
Next articleDirector Compared Ghilli Intro Song With Vaathi Coming !! Got Trolled

Director Vinoth Opened About Trimming Scenes From “Valimai” For The First Time!!

Director Vinoth, "Valimai" of whom released recently in theatres, appeared in an interview for all India radio channel and shared about many aspects of...