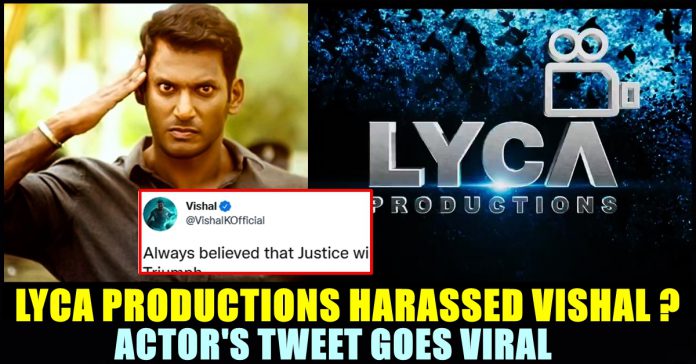 Now, as soon as the Judgement was made, actor Vishal uploaded a tweet, expressing his sight of relief. Chakra which was released on 19th February, 2021, starred Vishal and Shraddha Srinath in the lead roles while Regina Cassandra played the antagonist. The film revolved around a soldier and a police officer working together to bring down a cyber hacker. Directed by MS Anandan, the film was produced by Vishal himself under his own banner.

Through the tweet of Vishal, it could be understood that the case file by Lyca Productions has been dismissed by the Madras High Court. The actor said that the production company has been fined Rs. 5 Lakh for foisting a false case and for harassing him. “Always believed that Justice will Prevail & Truth will Triumph, The False Case against me & #Chakra Movie filed by LYCA has been dismissed by the Hon High Court of Madras today & hav ordered them to pay a penalty of Rs 5 lacs for foisting a false case & harassing me” read the tweet of the actor which is going viral among his followers.

Always believed that Justice will Prevail & Truth will Triumph,

Recently, Vishal was accused by Simbu’s mother Usha. T. Rajender regarding the red card issue for one of her son’s upcoming films “Venthu Thaninthathu Kaadu”. She released a video thrashing former President of Tamil Film Producers Council Vishal who imposed red card against the “Vallavan” actor. According to the video, Vishal who acted as the president of Tamil film producers councils in the past, concluded “AAA” issue saying that Simbu has to pay Rs. 2.40 crore to Michael Rayappan for every film he is going to act if he fails to do a film for Producer Michael Rayappan for free. In the video, she claimed that Vishal made the conclusion without the approval of Simbu.

“Is he a Supreme court Judge to give such judgement ? Vishal is accused of wasting Rs. 14 crore of Trust and members. When they questioned Vishal about the money, he ran away from the meeting after singing “Jana Gana Mana”. Without questioning Vishal or about the money he wasted, members of current producers council are targeting Simbu by considering the judgement he provided” Usha T. Rajender slammed. Read : Simbu’s Mother Thrashed Vishal On “RED CARD” Issue !! WATCH

On the work front, Vishal is all set to be seen in “Enemy” and the sequel of his “Thupparivalan” is getting ready as well.

Previous articleChinmayi Reacts To An Obscene Comment That Surfaced On Her Live Session !!
Next articleSeeman’s Tweet About Sasikala Became A Subject To Massive Online Troll !!

A brand new teaser of Chiyaan Vikram’s Dhruva Natchathiram released last night on the internet. The teaser has many high octane action sequences and...

Under the Gujarat's remission policy, eleven convicts who sentenced to life for gang rape and murder in the 2002 Bilkis Bano case walked out...