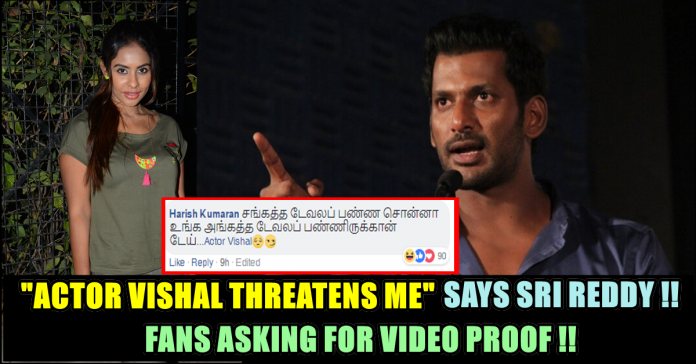 ctress Sri Reddy, who took Tollywood by storm with her shocking revelations about the casting couch, has accused many Tollywood personalities in the past of sexual harassment.

Sri Reddy accused Nani of sexually exploiting her and ruining her film / TV opportunities using his influence just a few days ago.

The Tollywood actress took to Facebook to reveal that she had met AR Murugadoss in Chennai and the latter had offered her a role in his films. However, she hasn’t heard back from him yet.

After Murugadoss, she targeted actor Srikanth and accused him of cheating her by promising to recommend a role in the movie. “5years bk I guess hope u remember the celebrity cricket league party in Hyderabad at the park hotel..i love the way u eat my p..sy.. u promised a role when we dance together in club..u remember ??#tamilleaks”, she posted targeting Srikanth.

Actress Sri Reddy already involved in several controversies regarding sexual harassment.  In a recent interview with Times of India, Sri Reddy has blamed Nani for not being able to be a part of Bigg Boss. “I was initially approached by the Bigg Boss team to be a part of the show. I gave my consent but when I did not hear from them for a month, I called them up to seek an update. I was then they told  me that they can’t take me on board because of ‘some politics’. I was shocked to hear that.”

Now today she accused actor Vishal as he is threatening her. She also says that she want to reveals the secrets of Kollywood’s dark side. Check out her post here :

For her post most of the fans brutally trolling Vishal. Check out their comments :

What do you think on her allegations ??

Previous articleAthletics Federation Blamed Hima Das For Not Being So Fluent In English !! Made People Of India Angry !!
Next articleHere’s The First Tweet Of “Agila Ulaga Superstar” After His Film’s Release !! & Its Already Winning Hearts !!

Arun Vijay Opened About Thalapathy Vijay’s Role In His Comeback !!

In his recent interaction for a media channel to promote his upcoming film "Sinam", actor Arun Vijay opened about how Thalapathy Vijay played a...