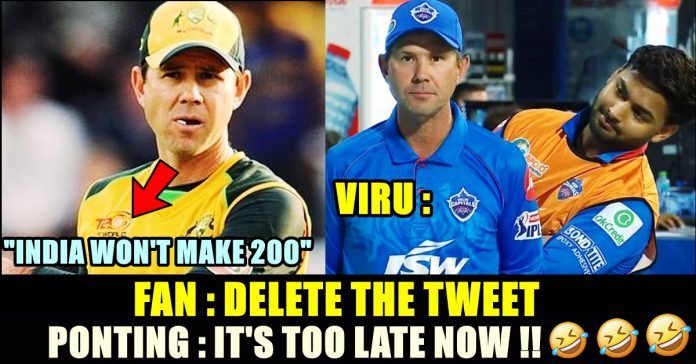 A reply made by Ricky Ponting to his followers during Australia’s batting innings is going viral now after Former Indian opener Virender Sehwag made a hilarious reply to it. The reply he made has a popular photography of himself and Rishabh Pant during the 2020 IPL tournament. The former Australian captain coached team Delhi Capitals which has Pant as one of the prominent top order batsmen.

Australia declared at 312 for 6, setting India target of 407 runs to win. Chasing such a huge target, Rohit Sharma and Shubman Gill gave India a decent start. While everyone wanted team India to play for a draw, Pant’s terrific innings of 98 runs from 113 balls gave the side to have a hope for the win. His successful partnership with Pujara could have made team Australia to think of many could have and would haves.

During Australia’s batting innings, Ponting has stated that team India will not be able to score even 200 runs of the third test at the Sydney cricket ground. The 46 year old believed that Australia had enough firepower in their bowling attack to restrict India and win the SCG test quite comfortably. Through 7cricket’s official twitter handle, Ponting made such bold claim while interacting with the followers.

“What is a good score to declare for Australia. AskRicky”, asked a fan and Ricky replied writing “310 ahead at the moment, but I honestly think India won’t make 200 in the second innings“. At that time, Team Australia were already leading India by 310 runs.

310 ahead at the moment, but I honestly think India won't make 200 in the second innings #AskRicky https://t.co/jLh01HCV7P

With Pant’s quick fire 97 and Pujara’s 77, India managed to get past 200 and the team is currently nearing 300 with 5 wickets in hand. Virender Sehwag who is pretty much active in social media platforms, made a reply to the tweet of Ponting uploading the hilarious picture where Pant did animated gestures during Ponting’s interview during one of the matches in the IPL 2020.

This reply from Viru went insanely viral as it garnered 30k plus likes and 6k plus retweets. Many other fans of Team India are trolling the former Australian skipper as well. On seeing it, the fan who made the question suggested Ponting to delete the tweet. “Little late to do that (it was a Q&A anyway, it’s all good)” the four time word cup winner replied.

Little late to do that (it was a Q&A anyway, it's all good)

“So much for the prediction of India scoring under 200, this pitch hasn’t deteriorated anywhere near what I was expecting. Like the way Rishabh Pant’s playing, it’s the perfect approach to take in these conditions. And now it’s game on” he said in his other tweet.

So much for the prediction of India scoring under 200, this pitch hasn't deteriorated anywhere near what I was expecting. Like the way Rishabh Pant's playing, it's the perfect approach to take in these conditions. And now it's game on #AUSvIND

Atlee Wished Shankar For Teacher’s Day & Got Brutally Trolled For Copying The Caption !!