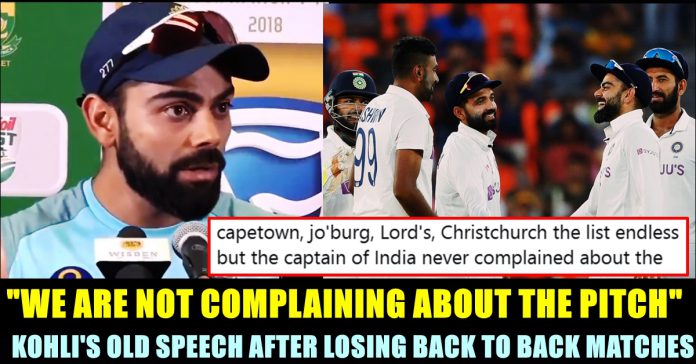 A huge debate on the behaviour of Motera pitch took place in social media platforms since the victory of Team India in their third test against England. The five day long test match got completed within two days as England lost all their twenty wickets while facing the spinners of team India. Many, including players who played for India in the past, argued that the spinning pitches like Motera, Chepauk could cause harm to the test cricket and demeaned the victory of team India.

In the meantime, several others stood with team India and gave credits to them for displaying excellent bowling skills. They said that the fate of the test match could have changed if India batted first and also pointed out the 10 wickets team India had in hand during the end of the test match.

“Pitch had nothing as such, no such demons as we call, there was nothing like that. It was a nice pitch to bat on, once you’re in, you can score runs as well as we saw,” said Rohit Sharma who scored a half century in the first innings and an unbeaten 25* in the second innings during the post match presentation.

“If I can recollect, lot of the balls most of the batters got out was to a straighter delivery. We also as a batting unit made a lot of mistakes while batting, it’s not just them. We also didn’t bat well in the first innings.” he added. However, many including Yuvraj Singh, Michael Vaughan criticized the pitch along with millions of fans.

Watch the video that is trending below :

listen to the king 👍pic.twitter.com/vUn0sVSeb0

Prasanna Lara, former performance analyst of South African cricket team and Level 3 certified coach from Cricket South Africa, on seeing the video said that every player needed this attitude of Kohli while playing away. “This attitude is badly needed when you play away from home to succeed. There will be challenges when you play away from home.Its all about accepting those challenges and find a way and that’s what India did In Australia recently” his tweet read.

capetown, jo'burg, Lord's, Christchurch the list endless but the captain of India never complained about the pitch we infact won test matches on unplayable pitches.

So proud of Virat and co. , always accepts defeat with grace without crying and giving excuse.😌

Comment your views on people blaming the pitch of Mortea for the result of the third test !!