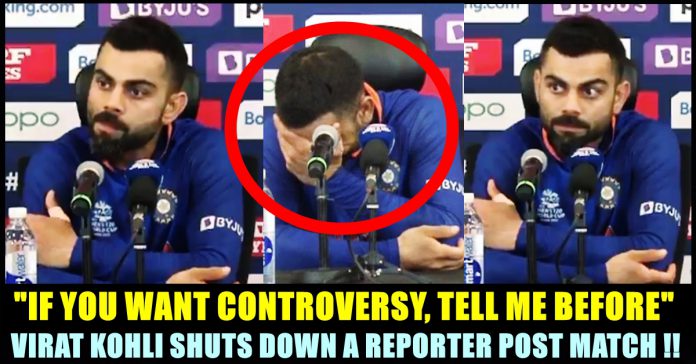 Virat Kohli took part in the press conference after losing to Pakistan in the first ever world cup t20 international that the team played in 2021. While answering to one of the reporters who asked whether he made a mistake by playing with Rohit Sharma instead of Ishan Kishan, Kohli face palmed and replied back saying “If you want controversy, tell me before, so I can answer accordingly” before making it sure that he played with a team that he felt as a best one. He also asked the reporter to tell his opinion.

Time to reflect and come back stronger 👍#TeamIndia #T20WorldCup pic.twitter.com/ZGvkQAMASy

Shaheed Afridi picked three main wickets of India which includes Rohit Sharma, Virat Kohli and KL Rahul. Pakistan openers Mohammed Rizwan and Babar Azam effortlessly chased the score down with 11 balls spare. Pakistan won India without losing a single wicket and broke the streak of 12-0 and made it as 12-1 as far as the world cup face offs of both the teams concerned.

Kohli, during the press meet, said that the 1 week gap before their next match with New Zealand will be useful for the team to bounce back stronger. Meanwhile a reporter questioned Kohli whether he should have played with Ishan Kishan instead of Rohit Sharma.

The reporter pointed out the batting ability Ishan displayed through the warm games and asked whether a mistake took place in the selection of the team. Virat started at the reporter for few seconds and said that is a very brave question and asked him what he thinks about it.

“I played the team that I thought as the best. What is your opinion?” Virat Kohli asked the reporter. “Will you drop Rohit Sharma from T20 internationals?” Kohli went on to ask. “You know what he did in the last game we played?’ he further asked and shook his head saying ” Unbelievable ”

“If you want controversy, please tell me before so I can answer accordingly” Kohli said with a face palm. Watch the video below :

Virat Kohli was left a bit stunned by a question in the press conference whether India should have selected Ishan Kishan instead of Rohit Sharma.

Previous articleThis Week Elimination Result Of BIGG BOSS 5 Leaked !!
Next articleMaddy Getting Attacked By Online Fans For His tweet About Dhoni During India Vs Pakistan Match !!

The management of Padma Seshadri Bala Bhavan group of schools released a public note, addressing the enormous number of complaints emerged against one of...

A candidate named Karthik who belong to BJP party, contested for the ward member post in the Coimbatore district and lost the election by...