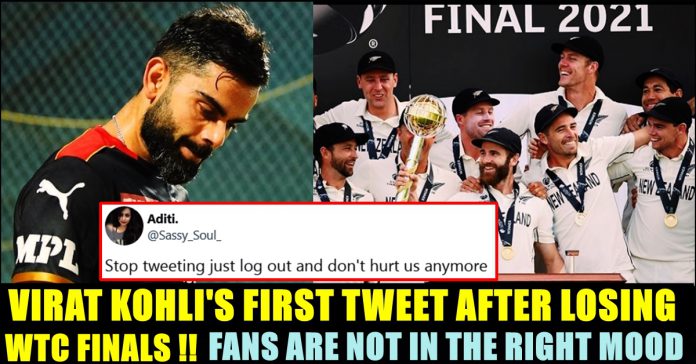 Indian Captain Virat Kohli came up with an emotional tweet after losing the final match against New Zealand in the World Test Championship. The 32 year old said that the group of players who play for team India are not just a Team but a family. He hoped for the team to move ahead Together and added a picture of the team members having a meeting at the field before going to field. However, fans of team India are not in the right mood for the post and started demanding various things from him such as stepping down from captaincy.

Indian Captain Virat Kohli, in the press match conference, said that he is not bothered too much about the result of the World Test Championship final. After two successful years of Test cricket, India stumbled at the last hurdle and lost the final match against New Zealand. Kohli said that he believes that Test cricket is a process and added that the nuances of the format cannot be fully utilised through just one match, especially when it’s to determine the champions of Test cricket.

“I am not in absolute agreement of deciding the best Test side in the world over the course of one game. If it is a Test series, it has to be a test of character over three Tests – which team has the ability to come back in the series, or totally blow away the other team. It can’t just be pressure applied over two days of good cricket and then you suddenly you are not a good Test side anymore. I don’t believe in it,” Virat Kohli said after losing to New Zealand in Southampton.

India lost the World Test Championship Finals to New Zealand after failing score enough runs in their second innings. The team got all out for 170 runs and the Blackcaps needed just 139 runs to win in the finals. The solid partnership of senior batsman Ross Taylor and Captain Kane Williamson made things easier for the New zealand team. Losing just two wickets in the fourth innings, the team registered their victory in the inaugural World test Championship tournament.

Meanwhile, Kohli came up with a tweet writing “This isn’t just a team. It’s a family. We move ahead. TOGETHER”

This isn’t just a team. It’s a family. We move ahead. TOGETHER 💙🇮🇳 pic.twitter.com/E5ATtCGWLo

Without winning a single trophy ? It's time you should step down 🙂

but India won our heart, kidney, stomach and 36 bones as well. 🙃

All this while we thought it is Team India.. turns out it is your family.. big scam 😆

We love team India including you but high time that you step down from captaincy and give chance to someone who can win trophies for India.

Keeping it at number one for straight five years and losing the final game. Then that 5 years won't be seen. Only those 5 days will be seen. Hustling throughout year in class tests and getting failed in final exams is considered fail, not pass.! 🤦‍♂️💯

Stop tweeting just log out and don't hurt us anymore

Don't satisfy Your Ego Bro. 8 years of IPL captaincy and 7 years of Indian team captaincy is more than suffficient to judge what you can do? Sachin tendulkar was a great batsman and not a great captain, He quit the captaincy and result is in front of everyone.

Focus on your game rather giving gyan on our festivals. And you may end up winning some ICC trophy one day.

Previous articleSRK Conducted A Chat Session With His Fans & His Tweet About Vijay Got The Highest Reach
Next articleVJ Parvathy Thrashed “Tattoo” Rajesh !! WATCH