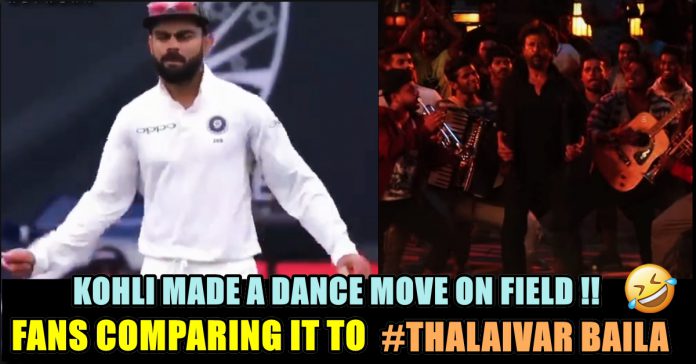 Indian skipper Virat Kohli might not have enjoyed a good outing with the bat in the first innings, but he enjoyed his heart out while taking the field on Day 3 when the hosts were struggling to get runs on board. Kohli was enjoying India’s good start to the series as he was spotted showing off his dancing skills during the day’s play. Earlier on Day 2, the Indian skipper was pumped up after certain dismissals of Aussie batters. However, his dance moves on the following day stole the show on the rain-affected Day 3 of the opening Test at the Adelaide Oval.

The ‘desi’ tunes were ringing inside Kohli’s head in full flow as he expressed his delight by dancing a beat following India’s fantastic bowling display, that helped India take a 15-run lead in the first innings. The cameras caught the 30-year-old ‘rock n roll’ rhythmically as the Delhi-born Kohli got into the groove. Here’s the video of the same:

In the first innings, Cheteshwar Pujara played a stunning knock of 123 runs after the Indian top order faltered once again in overseas soil. Openers KL Rahul (2) and Murali  Vijay (11) were sent packing early in the innings. Whereas, Kohli was dismissed for three after Usman Khawaja caught a blinder at Gully. Rohit Sharma did show some grit but was dismissed for 37 following a mistimed slog sweep. Rishabh Pant and Ravichandran Ashwin scored 25 each to support Pujara well and take the Indian tally to a respectful one in the first innings.

However Kohli’s dance moves went viral on social media that many users kept their favourite song in the background and released the video. Check out some of the reactions and video edits here :

@imVkohli doing some of his dance moves to Tamil music #AUSvIND #kohli pic.twitter.com/hfN1KOLjV3

TURN YOUR HEADPHONES ON FOR BEST EXPERIENCE:

The Delhi dasher broke into an impromptu dance while fielding in the slip region. https://t.co/W95iZ16yNm

I want to make Kohli dance with song, will I get suspended?

Me : this party is from a very distant relative, behave here !

What do you think on these moves by Kohli ?? Comment your views below !!