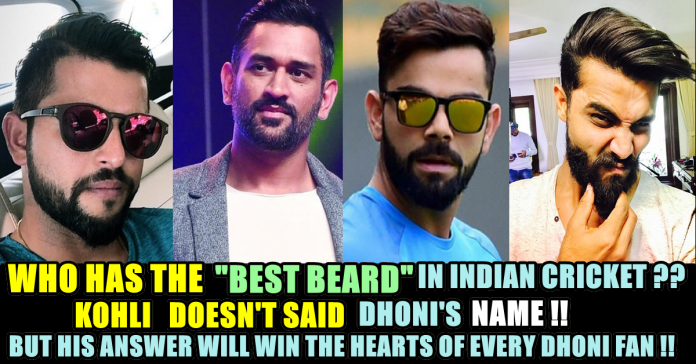 India Captain Virat Kohli today said he does not want to get rid of his beard as it suits him.

“I really like it. I think it suits me. So I don’t want to get rid of it,” the dynamic batsman, who is currently captaining IPL franchise Royal Challengers Bangalore, said replying to a query at a promotional event here. The Indian players have been sporting beards throughout the home season, but Rohit Sharma, Hardik Pandya and Ravindra Jadeja shaved off during the past IPL season.

Earlier too, Kohli had refused to shave off his beard in response to Jadeja’s #breakingthebeard challenge on Instagram. Posting the picture on Instagram, Kohli had said, “Sorry boys, but I am not ready to break the beard yet. Great job on makeovers though. Kudos.”

To this, his actress wife Anushka Sharma had replied: “You cannot!”

Kohli also said it is easy to look after the beard because of the availability of specialised oils for it.

“Looking after it is not that difficult because the beard oils have come in and it’s very easy. A little bit of beard oil and it’s in place,” he said. “When it gets too big and thick then obviously I have to trim it. That is the only thing. But no, I would not get rid of it,” he reiterated.

Other than Virat Kohli many other batsmen such as Dhoni, Rohit Sharma and even Raina grows beard occasionally. Sir Ravindra Jadeja also grew a thick beard recently but did some changeovers overs after it. But if a question raises like who has the best beard in Indian team, the heavy competition will ofcourse be between the current captain and the former captain of the team as they both will look stunning with their well grown beard. Surely a natural extension of the ‘dad bod’ is the ‘dad beard’. And who better to rock the dad beard than MS Dhoni. With a bit of salt and pepper, Dhoni has made his entry into seniority with a look that really suits his style at present as well.

Recently in a quick video a question asked to Virat Kohli about who has the best beard in Indian team. His answer was such a cute note and one cannot resist loving Kohli after hearing what he said. He did answered that “Mahendra Singh Dhoni has the better beard in whole Indian cricket team but when he does not have it, its me who has the best one” replied the Captain without any delay or hesitation.

Question : Who has the best beard in Indian Cricket Team !😄 . Virat : MSDhoni when he grows it and when he doesn’t have it, it’s me !😎

What do you think on this cutest reply of the boss of Indian cricket ??

Videos of action king Arjun bashing a number of "Survivor" contestants for not taking part in the show actively is going vial in social...