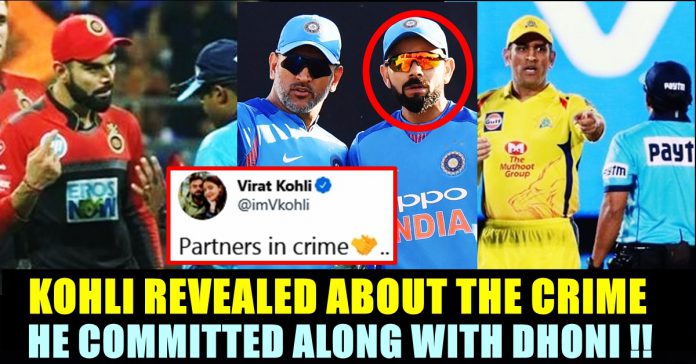 Virat Kohli and MS Dhoni are two of the cricketers who are enjoying a large number of fan followers. We have witnessed incidents where fans would breach the security guard and would storm into the field only to touch the feet of them. Fondly called by Tamilnadu fans as Thala-Thalapathy, Virat and Dhoni are known for their hard work and passion towards the sports cricket.

Rather being a mere teammates, Dhoni and Kohli always shared a special bonding between them. Mahendra Singh Dhoni, to give enough space to Kohli to captain the national side in 2019 world cup, stepped down from captaincy two years prior. Unfortunately, the team lost in the semi finals.

Despite of the opinions from media and former cricketers about Dhoni’s retirement, Kohli always backed Dhoni and stated that Dhoni will always be his captain. Both the cricketers are captaining different teams in Indian Premier League and the fans of both the teams are sheer rivals who often involves in verbal spat in social media platforms. But that doesn’t affect the relationship of the pillars of Indian cricket team.

Now Kohli who gave his come back to Indian team after a rest, has reminded about his partner and expressed it to the world by posting about it in his official social media platforms. The cricketer posted a picture of himself with Dhoni and wrote a caption which said “Partners in crime🤝.. Crime : stealing doubles from fielders at the boundary 😃. Guess who 🤔”

Partners in crime🤝.. Crime : stealing doubles from fielders at the boundary 😃. Guess who 🤔 pic.twitter.com/Gk1x6lBIvm

As soon as witnessing this picture, fans of the Indian team found that the one who is in the picture along with Kohli is Dhoni and started commenting his name without a second thought. Many even recognised the lovely gesture of Kohli and lauded him for reminding about the legend at this time.

This is so cute, please! Get your partner-in-crime back on the field, asap. Our patience is running thin and we miss you lots @msdhoni.

Previous articleWho Should Be The CM Candidate ?? Actress Opens !!
Next articleFans Disappointed With This Show Of Vijay Television !!

Remember The Film “Moodar Koodam” ?? The Director Revealed His Next Film’s Title Through This Top Director !!

Director Naveen, who received critical acclaim for his intelligent writing and screenplay in his black comedy Moodar Koodam where he also played one of...

Fan Tried To Mock Mitchel Johnson By Calling Him “Silly” !! Check How He Replied !!

When Yuvraj Singh's name was called out during the IPL Auction for the 2019 edition, there was an eerie silence in the room. From...

Female Celebrity Exposed The Toxic Comments That Surfaced For The College Student Incident!!