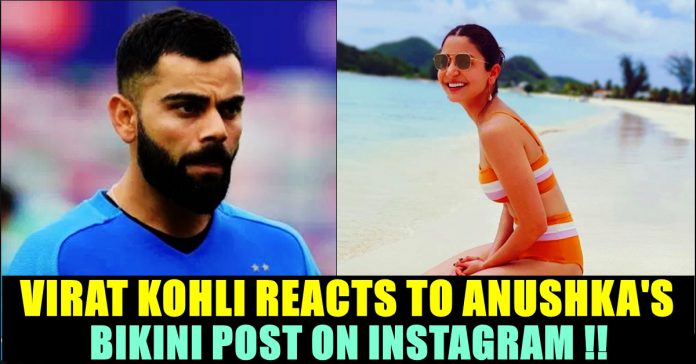 Anushka Sharma and Virat Kohli is the most happening couple in the country. Both being two of the most important person individually, never missed to post their daily routine in social media platforms such as Instagram and twitter. The “Sanju” actress, who is on a short break from work, is living it up with husband Virat Kohli. The 31-year-old actress, who is accompanying Virat on his West Indies tour, shared a sun-kissed picture of herself in a bikini on Instagram. Clad in an orange and pink bikini, Anushka looks beautiful with her hair pulled back in a bun.

Sharing the happy picture from a beach in Antigua, Anushka wrote, “Sun kissed and blessed.”

And the Indian captain is the one who reacted to it in the first place. The comment he posted so far received more than 17,000 likes from the app users. He responded to Anushka’s photo with a heart and lovestruck emoji. Both of them are very much active in social media platforms and make their appearance together in lot of occasions. Both of them an year ago, together posted a video of man throwing garbage in public. The couple was intended to make an awareness through questioning a fellow passerby who threw garbage on the public road.

In the video Anushka Sharma was seen questioning the strangers who threw garbage while travelling in their car. She shouted at them at first and suggested them to put it in dustbin. The whole incident was captured by Virat Kohli it is believed. Watch his post which was uploaded on June 16, 2018 here :

Saw these people throwing garbage on the road & pulled them up rightfully. Travelling in a luxury car and brains gone for a toss. These people will keep our country clean? Yeah right! If you see something wrong happening like this, do the same & spread awareness. @AnushkaSharma pic.twitter.com/p8flrmcnba

However, the couple became a subject of trolling as soon as this post went viral. In a way of countering back, Kohli in another tweet slammed them for seeing everything as a meme content.

Lot of people who don’t have the courage to do something like this find it funny. Everything for people nowadays is meme content. Shame.

What do you think on this lovely reaction from Kohli ?? Comment your views below !!

Lakshmy Ramakrishan Replied To A Fan Who Asked Her To Re-unite Dhanush & Aishwarya !!

A twitter user tagged Lakshmy Ramakrishnan of "Solvathellam Unmai" fame and asked her to unite Dhanush and Aishwarya like how she does for the...