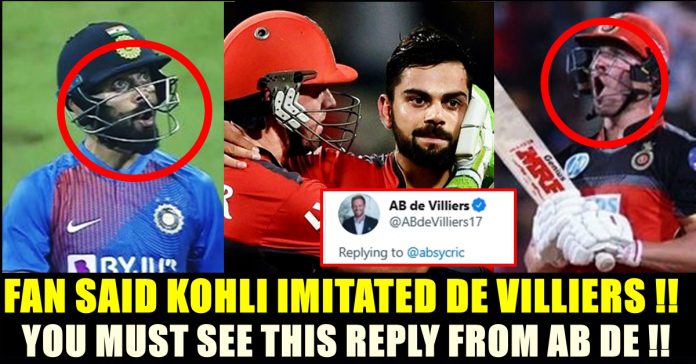 After losing the 2nd T20I in Trivandrum, India opted for a power-hitting approach from the start of the innings, ending up hitting 16 sixes in total. Virat Kohli who smashed an unbeaten 94 in the first T20I to help his side chase down the mammoth total of 207 in Hyderabad. In the decider on Wednesday, the right-handed batsman hammered 71 not out in just 29 balls with the help of 7 sixes and 4 fours, to help his side reach 240/3 in 20 overs.

Kohli was awarded the man of the series for his performance. On the back of his spectacular show, the Indian captain jumped up five spots in ICC T20I Rankings to reach the 10th position. Meanwhile fans again got the opportunity to witness the aggressive Kohli who sledged West Indies seamer Williams in the first match.

In the second t 20, Williams managed to get Kohli out and celebrated it by asking his teammates to be quiet. Kohli who was unstoppable yesterday, looked animated in the third T20 where he kept sending messages to Williams through his gestures even after playing a defense.

On Wednesday, throughout his quickfire innings, Kohli celebrated every bit of it in his own way. In the fourth ball of the 18th over which was bowled by Kesrick Williams, the bowler angled the ball in, Kohli stayed put and used his bottom hand to smack the ball high and mighty over deep mid-wicket. He looked at the ball, he then looked at the bowler and let out a massive yelp with wide eyes. It was a statement, both with the bat and then with his words, the Indian captain was just relentless on the night.

Reaction 😍😍 Its Kohli Vs Williams 🙌 pic.twitter.com/G2ibt6IQ5B

This particular moment from the match attracted the fans in big time who started sharing it in their respective social media platforms. One of a fan found this gesture of the cricketer similar to Ab De Villier’s. The former South african captain who plays under Kohli’s captaincy in IPL did the same gesture after hitting maximums occasionally.

The user wrote “He has definitely picked this from @ABdeVilliers17”.Check out his post here :

This post grabbed the attention of De Villiers who immediately wrote “Brothers” in the comment section with a laughing smiley. He even mentioned Kohli to show the post to him.

Check out his comments here :

Both the cricketers are known for their strong bonding even in their hard times. Being more of a family friends, the combination of Virat Kohli-Ab De Villiers in field has a separate fan base among IPL audience. As Kohli got mentioned by his buddy, he is expected to reply soon.

Myna’s Husband Got Upset Over The Bodyshaming Comments Made On His Wife!!

Television star Myna's husband Yogi expressed his displeasure over the body shaming comments that were made against his wife based on one of the...