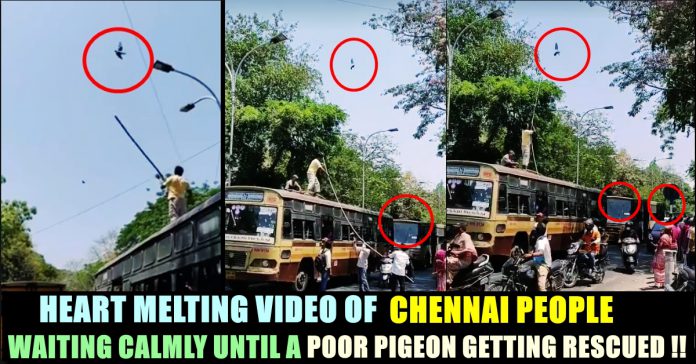 Humankind’s relationship with pigeons dates back to the dawn of civilization, and likely even earlier than that. Many birds are known to perform impressive aerial acrobatics in pursuit of prey or to avoid being eaten themselves, but few of those moves are more impressive than pigeons doing backflips. No one knows for certain why some types of pigeons roll backward somersaults in flight, though some suspect that it’s done simply for fun.

Maybe while doing such stunt in flight, one of our buddy got himself trapped in a electricity wire near Chennai, K.K nagar with a thin rope. Without being able to fly as before he hung there for a while until getting the attention from one of the passerby. As soon knowing about the struggle of the pigeon, people including auto drivers, street vendors and shop keepers gathered together to rescue the little mate.

According to Aarthi rangarajan who shot the video, the poor pigeon united people from different fields around the place to get himself some help. After many attempts, they asked help from a government which consisted many passengers. There wer e also people waited for the traffic to clear.  To our surprise none of them complained about the delay occurred. In her facebook post Aarthi Rangarajan wrote “This happened today, outside my place in KK Nagar. The poor pigeon had been hanging like that for a while… Don’t know who noticed first, but soon the local people; auto drivers, shop owners and street vendors started gathering. They tried catapults, ladder, ropes… I didn’t record any video of all that because I too was helping out and also I didn’t want to look like an idiot with a camera. But later I just couldn’t resist 😁.

Eventually they requested and boarded a moving public bus, used an elongated PVC pipe which was all stuck together by a shopkeeper nearby. And it actually worked!

Under the scorching sun. On a busy street. And the entire time, no one was honking or complaining. Neither did the passengers inside the bus.

Check out her post here with the blissful videos :

Pigeon is considered as one of the most intelligent of all the bird species. As said in the movie 2.0, Pigeons are also omnivores, and help control insect populations. The seeds that they eat can be excreted in other areas, so they are also seed dispersers. Studies have also shown that in areas that pigeons are known to poop, the soil is more fertile than in areas that they don’t.

The above video proves that the people of our place still have eyes for humanity and love towards one another. Let us spread this to everyone to make them aware of the importance of birds existence in our living place and also to expose the kind gesture of our people !!

Anitha Sampath who rose to fame among television and internet audience through her Bigg Boss stint, is pretty much active in social media platforms...