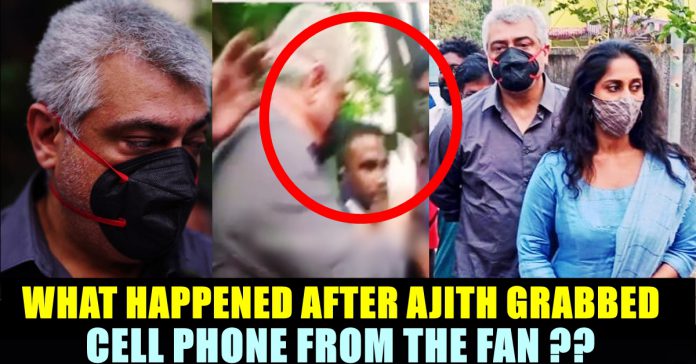 On the biggest day of Tamil nadu politics, some of the most prominent celebrated personalities of Tamil film industry have come forward to cast their votes at the early hours. Tamil actors Ajith kumar and Vijay have casted their respective votes and inspired their millions of fans big time. Meanwhile, a video of a number of fans breaching Ajith kumar’s privacy to take selfies and a video of the “Visawasam” actor grabbing the cell phone of one of his fans is going viral in social media platfroms.

Now, on the biggest day, people stormed their respective polling stations to cast their votes. Actor AJith kumar, one of the most celebrated actor in the Tamil speaking state, showed up at the Thiruvanmiyur polling booth as the first person among all the celebrities. He appeared with his wife Shalini. The actor was dressed in blue jeans and a grey shirt while wearing a mask on his face. Shalini spotted in a simple churidar.

Now, a video of the actor getting visibly frustrated over his fans clicking selfies with him is doing rounds in social media platforms. After grabbing one of the cell phones of his fans, the actor signalled few of them to go away.

Latest tweets from fans suggested that the actor has gave back the cell phone to the fan by advising him to wear a mask amidst this COVID 19 pandemic.

#ThalaAjith Requested his Fans to wear Mask!☺
Nice gesture by him ❤👌#TamilNaduElections2021pic.twitter.com/2t3O6S8ydL

Actor Ajith have always advised his fans not to spend much time on celebrating him and identified himself as a simple film actor. His frequent press releases suggested the fans to look after their family. Most recently, on seeing his fans demanding “Valimai” update to sports, political personalities, he released a press note asking them to wait.

He asked his fans to maintain dignity in social media platforms and in public places. “I believe that people who truly love me would realize what I said and act accordingly” he concluded his note.

On the very first day of the 100 days reality game show, actress and model Akshara Reddy became the victim of online fans as...