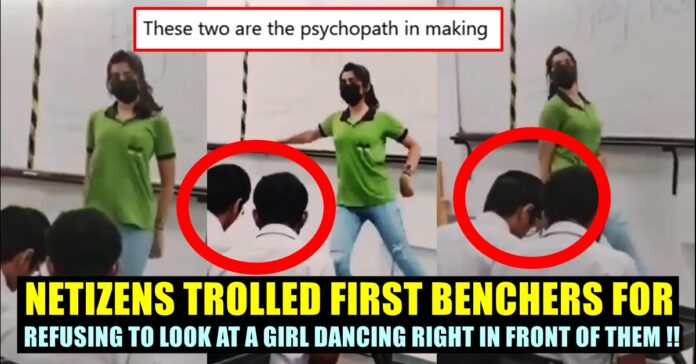 A viral video that shows two boys concentrating on their studies in a class room while a girl is dancing near the board is trending in the micro blogging social media site with various kind of reactions from the users of it. Though the whereabouts of the video is not officially known, two male students who were deliberately avoiding the girls caught the attention of the online users. On seeing “Allen” written on the girl’s T-shirt, netizens concluded that the incident took place at Allen university. 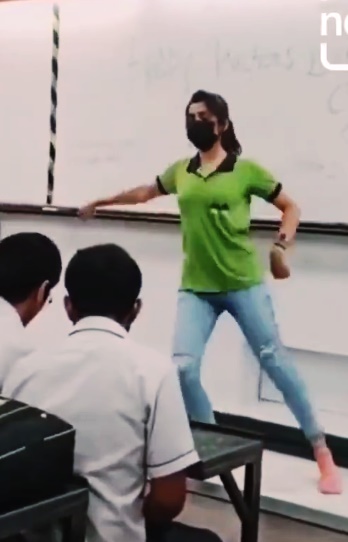 In the 2 minute 20 seconds long video which is presumably from the north part of the country, a girl wearing green t-shirt and blue jean could be seen shaking her legs with a series of Hindu songs being played in the background. She was also seen wearing a black colour safety mask.

While she was passionately dancing in front of the whole classroom, two boys who were sitting in the first row deliberately avoided seeing her and were focusing on their notebooks. They were also seen seriously discussing about something and acted like that the girl was invisible.

The video is doing numbers in Twitter with 1 million plus views. With Stand up comedian Ronny Bhaiya appreciating the first bench lads, they also became a subject to trolls by the internet using citizens. “I need this type of focus in life” a social media user commented whereas another one said “when you have a major (mains+adv) test on upcoming sunday”

A number of users said that the entire video could be staged as well. Check out some of the reactions the video garnered below :

I need this type of focus in life https://t.co/yFRq13Q5VX

These two are the psychopath in making https://t.co/2IPiXuc1sD

What’s happening? And why the boys in first row are not normal? https://t.co/OQITAp7PMy

Both after classes are over… pic.twitter.com/9e11A7gv4W

when we go movie with parents and suddenly a romantic scene starts https://t.co/qIE6Ts9FdJ

Both boys sitting in front seats are student of CA or MBBS. Both didn’t even take a little interest in Dance.😄😂😄😉🤭 https://t.co/3vooYXCbuN

Students sitting in first Row are Going To Crack NEET and UPSC both. #Dedocation https://t.co/nzIJ9OpDV1

100% engeneering batch this is. medical batch has separate batches for girls and boys in allen.🤦🏽‍♀️ https://t.co/mz0hbDfIC5

Yes, I am married to exactly like the left one with his head down drowned in his books…

Yes, we do have boys like this…
And yes he did crack all the entrance exams in first go too 😊😊 https://t.co/wLMLuVZBmH

Previous articleVikram’s Speech About The Achievements Of Our Kings Even Before USA’s Discovery Won Hearts !!
Next articleRavi Ashwin Wants “Non-Striker” Run Out To Be Added In Bowler’s Credit !!

The new advertisement for CRED featuring former Indian cricketer Rahul Dravid is trending in social media platforms with heartfelt reactions. Along with many cricket...

Vignesh Shivan To Produce Nayanthara In Her Next !! Check Out Who Directs !!

Nayanthara, who is basking in the success of her films such as , seems to have taken some time off and flown to the...

"Draupathi" director Mohan G has invited Pa.Ranjith to watch his film and share his opinion. What started as a least expected low budget upcoming...