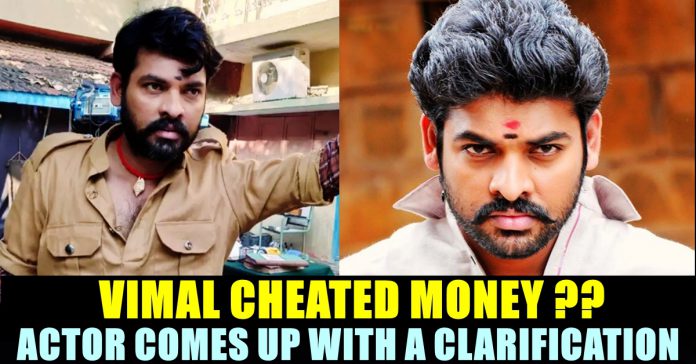 Actor Vimal, reacting to the money laundering accusations emerged against him, has issued a statement to the press reporters. The actor said that the people who couldn’t tolerate his growth in film industry are causing such accusations against him.

He established himself as a successful upcoming actor with Kalavani, after that he has claimed his name with these comedy movies Vaagai Sooda Vaa, Kalakalappu, Kedi Billa Killadi Ranga, Desingu Raja, Manjapai and Mannar Vagaiyara. Now, reacting to the money laundering accusations against him, the actor said that he will be filing defamation case against those who are spreading false accusations against him.

According to reports, a person named Thirunavukarasu has filed a series of complaint against the actor alleging that Vimal had cheated him by not returning his money. “I have read about the false accusations against me in news portals and social media platforms and got extremely upset. People who couldn’t tolerate my growth are spreading such false accusations against me” said actor Vimal, according to reports.

“Thirunavukarasu is spreading rumours against me with the influence of unknown people. I neither have direct contact with him nor exchanged money. I am also going to file a defamation case against him. His main intention is to get money from my by cheating.” the actor said in a statement, according to reports.

According to Indiaglitz, Thirunavukarasu who filed case against the actor has stated that he is ready to face any legal inquiry regarding his complaint by making sure that he has enough proofs against the Kollywood actor.

Recently, Priyadarshini, along with her husband Vimal, met DMK’s Youth wing president Udhayanithi Stalin to express her wish on competing in the upcoming assembly election on behalf of DMK. The duo handed over the application to the son of DMK chief MK Stalin in order to get a ticket from the party to contest in the upcoming elections. Pictures of their meeting went viral in social media.

Previous articleStory Of “Nenjam Marappathillai” Belongs To This Famous Actor & Dance Master ??
Next articleActress’s Fitting Reply To People Spewed Hatred At Her For One Her Insta Posts !!

“Why You Supported Modi In 2014 ?” Follower Questioned !! Here’s How Siddharth Answered

On seeing actor Siddharth constantly voicing against the BJP government through his official twitter handle, a follower named Veena questioned him why he felt...

Controversial personality Meera Mitun said that actress Priya Anand copied her face and the actress reacted to the video through her official Instagram account....

Sameera Reddy Conducted A Gutsy Underwater Photoshoot !! Check This Reaction From A Woman !!