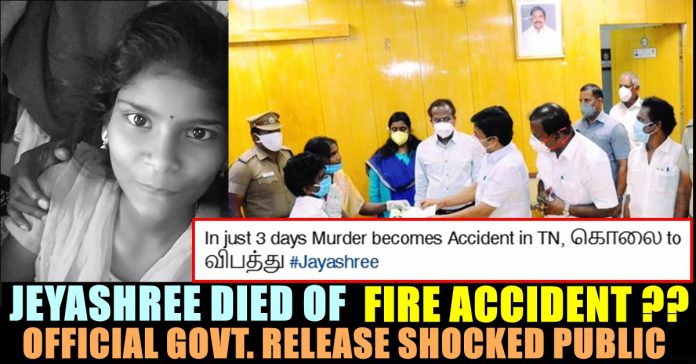 A screenshot of an unknown news daily which alleges that Jeyashree died of fire accident made users of social media angry. A couple of days earlier, several hashtags seeking justice for the demise of 14 year old Jeyashree emerged. Many celebrities and influential personalities including Chief minister Edappadi K Pazhaniswamy came up with tweets, reacting to the news. It was reported that two members who belong to the ruling party caused the death of the child in a most horrific way.

The CM of Tamilnadu pledged to give Rs. 5 lakh to the family of 14 year old Jeyashree who was studying 10th standard. In the press statement, Chief minister said that he is severely condemning the act of the accused. “I deeply saddened and depressed on knowing about the news regarding the death of Jeyashree. I offer my condolences to the family of Jeyashree. A case has been filed and the investigation is on against the accused in Thiruvennainallur police station. I severely condemn this cruel act of Murugan and Kaliyaperumal. A strict action will be taken against those who involved in this. I ordered to provide Rs.5 Lakhs from the CM relief fund to the family of Jeyashree” his statement read.

Now, according to a popular journalist, an official press release from the Villupuram district Collectorate has reported the incident by mentioning it as a fire accident instead of murder. The official government press release said “A cheque of Rs.5 Lakhs has been provided to the parents of Jeyashree who died of “fire accident” by Minister Mr. S.V Shanmugam” which made people of Internet angry.

“Is there any revolutionist like me who trended hashtag that day seeking justice for Jeyashree ?” asked one of a twitter user whereas another one wrote “In just 3 days Murder becomes Accident in TN”

Here’s their reaction on seeing the news :

Law minister CV Shanmugam handed over ₹ 5 lakh cheque to the parents of #Vizhupuram Jayashree as compensation by the govt.

The caption says the kid Jayashree died due to fire accident. So, according to ADMK personnel she is neither killed nor burned. #JusticeforJayashree #Admkfails pic.twitter.com/NL7TiHe1p8

It is also notable that a popular news daily mentioned that the murder was committed by some unknown people. Men who belong the ruling party of Tamilnadu named as G.Murugan (52) and K. Kaliyaperumal (60), tied Jeyashree’s hands and legs and poured petrol on her before setting fire on her for refusing to open a shop which belongs to her father. The incident happened in Villupuram.

On Sunday, Murugan who went to Jayshree’s house to ask her father to open a shop he owns in the locality, came to know that Jayabal was not in house. When Jayashree who was present at her home refused to open the shop and told Murugan to deal with her father, the accused left the place in a furious state. At that time, Murugan was drunk, according to police reports. After few hours, when a smoke came out from the house, neighbours rushed to the house of Jayashree where they saw her ablaze with hands and legs tied. They tried to save her by pouring water on her immediately and rushed to Villupuram medical college hospital for treatment but the child died fighting for her life. It has been reported that Murugan and Jayabal are relatives and had land related issues in the past.