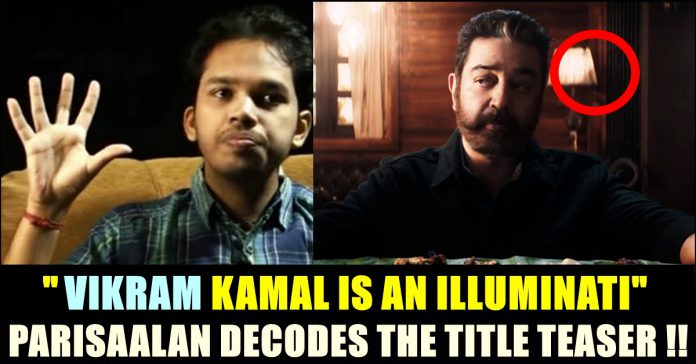 Paari Saalan, a popular youtube influencer who is known for making controversial statements about The Illuminati, an alleged secret society, accused actor Kamal Haasan of representing illuminaties through the title teaser of his upcoming film “Vikram”. He said that the 142 seconds teaser symbolically showed Kamal Haasan as a representative of the “Illuminati” group.

The title teaser showed Kamal Haasan donning a black full shirt, folding it a bit enough to expose the Kada he was wearing as he did in his 1988 film Sathyaa and black trousers with salt and pepper hairdo. The teaser opens with a large villa located amidst a forest in which Kamal Haasan is cooking a lavish South Indian entree. In the meantime, he is also making it sure that his weapons are fully loaded and ready to take down at least a small army.

Now, on seeing the teaser, Paari Salan who said that the teaser is full of symbolism, linked it with the US president election results. “Generally, Teasers would release before film’s release. But they haven’t started shooting for this film “Vikram” but made this teaser during US president election which is fishy.” he said in the interview.

Further Paari salan said that the first frame of the teaser shows Kamal receiving the sunlight by standing near a window. “We have been telling it for a long time that an Illuminati is someone who observes light. Kamal is symbolically denoting that he is a man of light” Paari said. He also said that the pictures and statues of “deer” that are used in the background of the teaser represents the dead Jews.

“Vikram” is touted to be an action flick that is scheduled to release during the summer of year 2021. As soon as the title teaser released, it went insanely viral across the internet with millions of positive reactions. As of now, the teaser was liked by 5 lakh people with a views of 10 million plus.