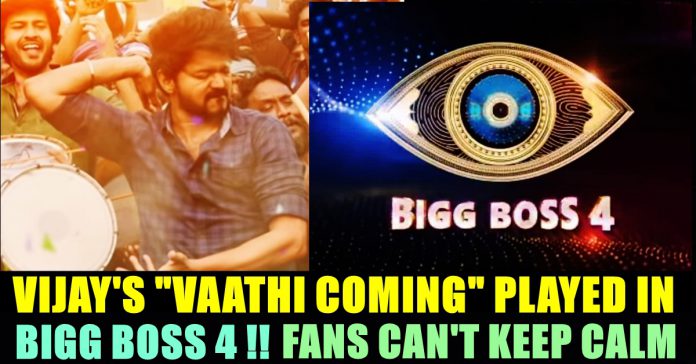 While the fourth season of Tamil Bigg Boss is gearing up for the telecast of first episode from mid October, the Telugu Bigg Boss show has already started and went past 15 plus day. The show premiered on 6 September 2020 on Star Maa and Disney+ Hotstar with Akkineni Nagarjuna returning as the host for the second time.

Abijeet, Akhil, Ariyana, Avinash, Devi, Divi, Gangavva, Harika, Kumar, Lasya, Mehaboob, Monal, Noel, Rajasekhar, Sohel, Sujatha, Kalyani, Surya are the contestants who got participated in the show. Surya and Kalyani were evicted from the show due the less number of votes from the audience.

It is very well known that Bigg Boss organisers would play a cinema song every morning to wake the contestants up. In the last season of Tamil Bigg Boss show, a contestant named as Losliya rose to fame among Tamil youngsters only through the dance performances she delivered during the wake up songs. Now, to our surprise, in the Telugu Bigg Boss show, a Tamil song was played and the fans can’t keep calm on seeing Telugu speaking participants shaking their legs for a Tamil song.

Yes. On the 11th day of Telugu Bigg Boss show, “Vaathi Coming” from actor Vijay’s upcoming film “Master” was played as a wake up song for Telugu Bigg Boss stars. Almost all of them danced for the song with full enthusiasm. The most surprising part about their dance segment is, that few of them did the shoulder step which would feature in the original Tamil version.

Online vijay fans of Telangana district recorded the video and uploaded it in the micro blogging social media site to celebrate the special moment. “Master mania in #BigBossTelugu4 house..#VaathiComing. observe the steps once ….shoulder step ✌✌✌✌ ❤❤❤ Thank u so much Star Maa” their tweet read.

Fans of actor Vijay couldn’t keep calm on seeing their favourite actor’s song being celebrated in other state. Check out some of their reactions below :

As far as Tamil Bigg Boss show is concerned, Ramya Pandiyan, Gabriella, Shivani Narayanan, Anu Mohan, Rio Raj, “Jithan” Ramesh, Singer Aajeedh, VJ Archana, Sanam Shetty have been confirmed as contestants. The show will see 14 plus celebrity contestants locked into a house with weekly elimination based on audience’s vote. The one who survives till the 100th day with highest number of votes will be announced as the winner. So far, aspiring model and actor Aarav, “Madras” fame Riythvika and Malaysia based singer Mugen have won the titles.

Comment your views on Vaathi coming being used in Telugu Bigg Boss show !!