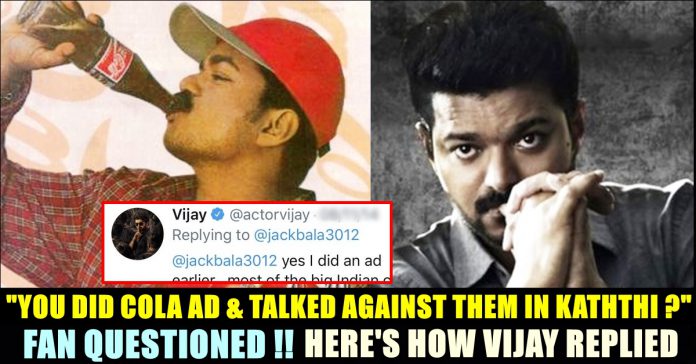 A screenshot of the replies made by actor Vijay in the year 2014 regarding a question asked by one of his follower on endorsing Coca Cola drinks is doing rounds now. The reason behind the emergence of the screenshot in Twitter space now is nothing but a tweet posted by controversial personality Meera Mitun. After she questioned Vijay for acting in Coca Cola advertisement and for acting in Kaththi movie, fans replied to her with the screenshots of Vijay’s replies regarding the same which is now trending in other social media platforms.

To a fan who asked why he acted in Coca Cola advertisement earlier and talked against them in Kaththi movie, Vijay, at that time replied to him by saying that he is also a normal human being who rectifies his mistakes. “I feel happy to have done that now. Ennoda Thavarugalai thiruthikolgira Sadharna Manushan thaan naanum” the actor wrote in his tweet.

Further, the actor added that he don’t endorse the product from that period. “When I heard Kaththi script, it did make sense to me and I voiced it through Jeeva character.” he said who also accepted that he did an ad earlier which was endorsed by high profile celebrities like Sachin and Aamir Khan. “I would be extremely happy if people start questioning political parties like this when they make electoral alliances” the actor wrote.

Former Bigg Boss contestant Meera Mitun has been making baseless allegations against actors Vijay and Suriya for past few weeks. She said that they both are the product of Nepotism and involving verbal spat with the fans of the actors in Twitter. Lately, she posted a tweet saying that she is not actor Vijay to act in Cola advertisement and preach people on water conservation in order to make people.

Am not @actorvijay to act in kola ads and preach about water conservation. I dont endorse any brands #KollywoodMafia , Understand first what is fashion runway and I don't do ads to fool fans.

After seeing this tweet from her, people started sharing the above screenshots to make her aware of the actor’s answers.

On seeing the videos and tweets of Meera Mitun against actor Vijay, one of an ardent fan made a video abusing her. Sharing the video, Meera said that the fans of actor Vijay are uncivilized. “I hope #sangeeta will now understand what kind of fans her husband @actorvijay has got” she wrote while adding the tweet.

This is what I have been telling for months for years together @actorvijay fans are uncivilized and she is a lady fan of @actorvijay who has used these words, I hope #sangeeta will now understand what kind of fans her husband @actorvijay has got pic.twitter.com/gZ2ZfQJPoW

Earlier, Vijay’s closest friend and actor Sanjeev posted a tweet asking the fans to “IGNORE NEGATIVITY”. Read : Sanjeev Reacted To Meera Mitun’s Atrocity !! Comment your views on these allegations of Meera Mitun and the replies she is receiving from Vijay fans !!