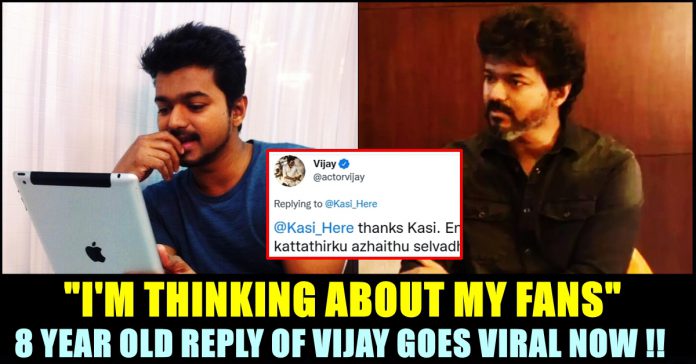 A reply made by Vijay on his 39th birthday to one of his twitter fans is being widely circulated now in the micro blogging social media site. In the tweet, Vijay could be seen saying that he is deeply thinking about elevating his fans to the next level. The tweet is currently receiving humongous amount of troll from the twitter users for various reasons.

Actor Vijay, known for predominantly appearing in Tamil films, was last seen in “Master” directed by Lokesh Kanagaraj. The actor who debuted 27 years ago in the Tamil film industry, influenced enormous number of youths and kids through his onscreen presence. Several fan clubs are being operated across the state only to celebrate him. Most recent instance for the power of his fan base is a selfie the actor captured in the shooting spot of “Master”.

The actor who is currently busy shooting for his upcoming film “Beast”, was pretty much active in Twitter platform at a period. Nowadays, he uses the account only to share the first look posters of his films. At that time, the actor used his twitter handle to interact with his fans every now and then. On his birthday event that took place in the year 2013, Vijay involved in a question and answer session with his fans.

One of his fans asked the actor to tell the pledge he took on his birthday. “I am your true fan brother. What’s the pledge you took on this birthday of yours” the fan asked. Check out his tweet below :

After 8 long years, the tweet is doing rounds in Twitter platform with various kind of reactions. “Read it in Vadivelu modulation” a fan said to troll Vijay whereas another one said “

Asal Kolaru Has A Girlfriend Outside?? Video Goes Viral

Queency, while talking with Azeem, has revealed that Asal Kolaru who is getting into controversies for his behaviour towards female contestants, is having a...